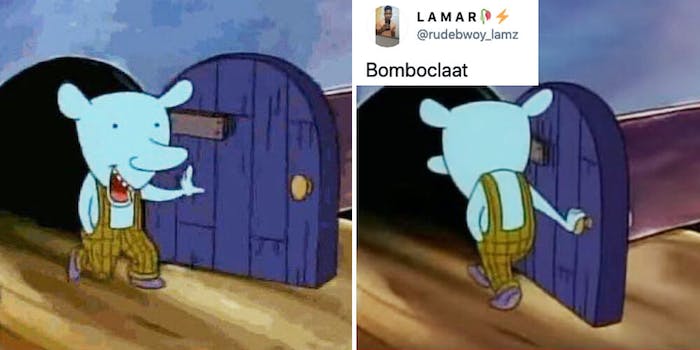 But the phrases are not interchangeable.

For the second time in as many months, a phrase—and one that may sound like nonsense to the uninitiated—has gone viral thanks to African Twitter.

First it was “sco pa tu manaa,” which we have since learned is a slang term in Hawaiian culture that took off after it was featured in a song by Ghanaian recording artist Kawoula Biov earlier this year. The phrase, as intended, typically means, “What experience does this remind you of?” or “I’ll hit you.” And now, “bomboclaat” is the latest term to take over Twitter.

The use of ‘bomboclaat’ on social media

Much like sco pa tu manaa, bomboclaat is a slang albeit expletive term that originated in Jamaica. As Techpoint.Africa points out, however, it began to be picked up by Nigerian Twitter in the fall of 2019, before eventually spreading like wildfire across the platform.

The phrase seems to have been first tweeted by Jamaican Twitter user @rudebwoy_lamz in early September, who paired it with the “Winslow’s seen enough” meme from the Nicktoons series CatDog.

One month later, after the phrase incorrectly began to be used interchangeably with “sco pa tu manaa,” rudebwoy_lamz quote-tweeted the tweet that started it all.

“Me coming to twitter to see them misusing bomboclaat,” rudebwoy_lamz wrote.

Others, mostly Jamaicans, likewise jumped in to school bomboclaat misinterpreters on Twitter.

As far as what bomboclaat actually means, the rough translation boils down to, “What is eating you up?” or “What is troubling you?” Urban Dictionary defines it as a “common Jamaican expletive” that can be used in “either extremes of excitement or sadness or vexation at a person or just as an expression.” It can apparently be used interchangeably with expressions such as “damn,” “oh my gosh,” “shoot,” darn,” or “hell.”

Why you should stop using ‘bomboclaat‘

Once the meme took off, Twitter users explained how people were incorrectly using the term.

“Hi non-Jamaicans: The term ‘bumboclaat’ or ‘bomboclaat’ does not mean what you think it does. It is not a greeting, a question, or a means of asking ones opinion. It is an expletive, one used to express shock, anger, excitement, or befuddlement. So stop using it. Thanks,” Twitter user @rin_becalm explained.

Here are some examples of people using the term bomboclaat on Twitter (to varying degrees of success).

In 2021, people are still occasionally using bomboclaat on Twitter, but the term’s popularity has certainly decreased. The internet has moved on to the next viral meme.