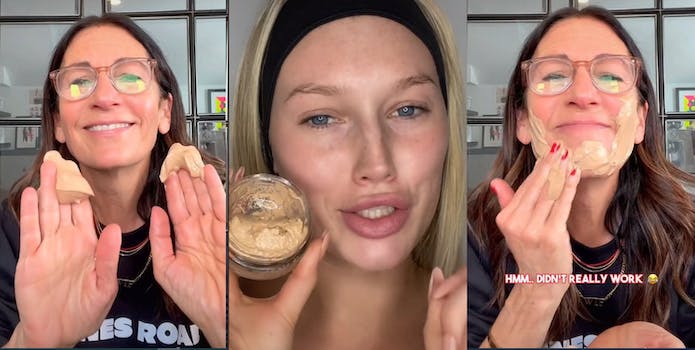 'Not you shading her.'

Bobbi Brown’s Jones Road What the Foundation (WTF) Tinted Moisture Balm has caused a stir since it was released.

While some beauty influencers praised the product, others, like TikToker Meredith Duxbury, were less sure. Her review of the product amassed 12.6 million views, but its virility was less to do with her review, and more with the way she appeared to apply the product.

♬ Love You So – The King Khan & BBQ Show

As more and more social media users shared the TikTiok review, highlighting the way Duxbury scoops out the product and applies it like a moisturizer, it looks like Bobbi Brown herself got wind of the trend, as they posted a TikTok appearing to parody Duxbury’s video on the brand’s own verified account.

“I’ve always love learning new makeup techniques and I learnt one today,” she said in the video, appearing to mimic Duxbury by scooping up the product with her hands. “I’m not sure if it’s going to work but I’m going to try,” she added rubbing the foundation into her face.

“Hmm. It didn’t really work,” Brown concluded. Although Brown didn’t directly call out Duxbury, viewers of the TikTok, which has amassed 1.2 million views, put two and two together in the comments section.

“Not you shading her,” one commenter remarked. “If BOBBI BROWN dragged me like this I would quite literally never show my face again,” another added. “This is the kind of light-hearted drama this app needs,” a third said.

@justbobbibrown How did I do?? Applying Jones Road’s light to medium coverage What The Foundation 🤣😅 #foundation #foundationhack #foundationroutine ♬ original sound – Bobbi Brown