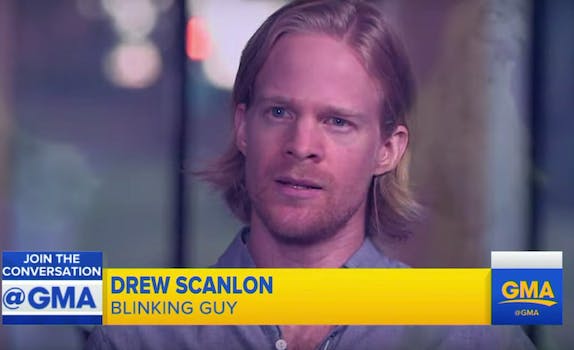 The ‘white blinking guy’ practices some new blinks for TV

He's not the famous actor you probably thought he was.

The white guy blinking is a widely shared reaction gif used to express astonishment or bewilderment. It was the second most popular gif in 2017, with 226 million views. And now the man in the gif, Drew Scanlon, will forever be immortalized as “blinking guy.”

Scanlon recently appeared on “Good Morning America” during a segment on the top memes and gifs of this year. He talked briefly about his surprise internet fame, while the caption “Drew Scanlon, Blinking Guy” appeared below. The internet loved this title.

While it's rad that the world is exposed to the quiet magnificence of @drewscanlon, this stuff always feels like parallel universe shit. pic.twitter.com/PniP4mni20

dude i take it back 2017 is hilarious pic.twitter.com/JRUEk4ODVH

And he revealed the behind-the-scenes work he had to do for the GMA segment.

The interview took about 30 minutes. At the end, Sarah requested some "blinking white guy" looks for B-roll purposes. She even had me do a few takes where I blinked and said "good morning, America" into the camera.

That’s right, he had to blink on command.

The reveal of Scanlon as the “blinking guy” disappointed some people who thought that the man in the gif was actually The Princess Bride‘s Cary Elwes or Dexter‘s Michael C. Hall or Parenthood‘s Peter Krause.

Wait. You mean to tell me 'blinking white guy' is not #Dexter (Michael C. Hall)??? What in the dopple-ganger is going on? 👽 pic.twitter.com/svJsn5yGDp

Wait, this whole time, Blinking Guy wasn't Peter Krause? I even told my daughter it was Adam from Parenthood. She's always pleasantly surprised when I know a meme, and now l have lost all meme credibility. pic.twitter.com/s5pSEmY5YU

Others were disappointed that Scanlon looks different now than he does in the gif, which originated from a video game live-stream in 2013.

We like to think that Scanlon would blink in surprise at that assertion.