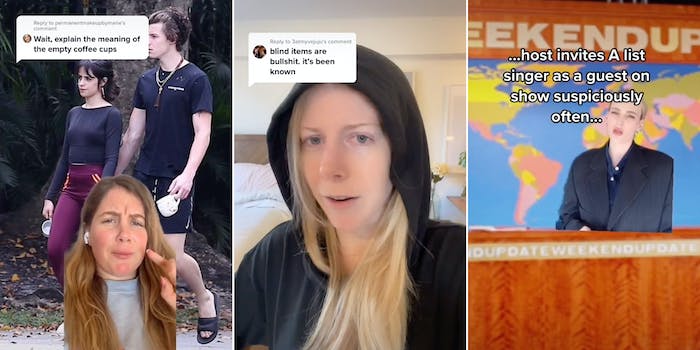 How blind items have evolved on TikTok

TikTok bridges the gap between old and new gossip.

In October, news of John Mulaney and Olivia Munn’s alleged split was announced not in a breaking tweet from TMZ or by a popular gossip account, but via a visibly sick man on TikTok. He’d reportedly seen a blind item on the Deuxmoi subreddit, asked some industry friends to confirm, then took to TikTok to “break” the news. The couple never directly commented on the rumor, and they shared photos of their newborn son in December.

TikTok is the new pipeline for gossip and blind items. Over the last two years, the pandemic made many of us more hyper-focused on celebrity, or finding clues in posts. But how gossip is distributed has evolved, and a community grew on TikTok that presented it in a more relatable, digestible way. There’s a move away from the anonymous blind-item model and toward a crowdsourced, personal one.

Shannon McNamara, who posts as FluentlyForward, has more than 300,000 followers. Her most popular recent TikToks, with more than a million views each, are on Joe Rogan’s purported vaccination status and a passionate response to a comment about blind items being “bullshit.”

McNamara tells the Daily Dot she initially posted about dating and life in New York City on her account, but last summer she came across a few Crazy Days and Nights blind items, allegedly about TikToker Addison Rae. The video blew up, and the response was telling: According to McNamara, a lot of followers apparently hadn’t heard of Crazy Days and Nights, a long-running gossip site helmed by a lawyer who goes by Enty, or they weren’t as familiar with blinds.

In roughly six months, McNamara has become one of the most popular blind-item accounts, but she says it’s just what she does for fun—she has a day job as well. The requests she gets from followers change with the media cycle: Right now, people want gossip about the cast of Euphoria, or Tom Holland and Zendaya. But she says she’s often commenting on items that have circulated on the internet long enough to become “lore” or an open secret.

Quite a few TikTok gossip accounts cite Crazy Days and Nights as their source, more so than Deuxmoi, an anonymous Instagram-based account that started during the pandemic. McNamara says Deuxmoi is more of a Gen Z source for gossip and blinds; CDAN, which started in 2006, is more familiar to millennials and Gen X. It was the subject of a recent BuzzFeed report about its content reportedly going QAnon, which Enty denied. He joined TikTok in October and has more than 60,000 followers. Enty posts exclusive blinds there, including ones about TikTokers.

TikTok has allowed for new ways of talking about blinds. Dearjane, who goes by the username klatschhh and has more than 397,000 followers, takes a more physical approach: She reenacts blind items submitted to her and plays all the roles involved. In a now-deleted TikTok from November, she acted out an item that was allegedly about In the Heights star Anthony Ramos, right before the announcement that he and Jasmine Cephas Jones broke up. A rumor about Jimmy Fallon and Ariana Grande also went viral, though it appeared on CDAN in 2019.

There’s more specialization, too: Celebrity Memoir Book Club dishes dirt from celeb memoirs, and kardashian_kolloquium assesses the Kardashian industrial complex. Emily Rose, who posts as itsbecomeawholething and has more than 225,000 followers, doesn’t do blinds but has become a go-to for celebrity PR explainers. One of her most popular TikToks, at more than 3 million views, is about Shawn Mendes and Camila Cabello’s oddly staged pandemic walks.

Rose doesn’t have a background in PR, but she tells the Daily Dot that on top of her celebrity obsession, she comes from “a family of researchers.” She’s only been running the account for two months, and says she tries to focus on “reading between the lines of what we’re told in the press.” Her first TikTok in November was about the press spin around Astroworld, but she specializes in PR couples.

She now gets requests “every day,” though TikTok coexists with her full-time job at a nonprofit. “I only want to be doing this stuff,” Rose says. She’s debuting a podcast on Jan. 24 in an effort to grow her brand.

McNamara says that the difference between Deuxmoi and accounts like hers is there’s a face to go with the gossip, and it’s more conversational. Rose agrees that gossip accounts’ popularity is largely tied to relatability and personality—you develop a relationship not just with the celebrity, but the person posting about them.

“My friends have said that my TikTok channel is exactly like what it’s like to sit on the couch with me,” Rose says.