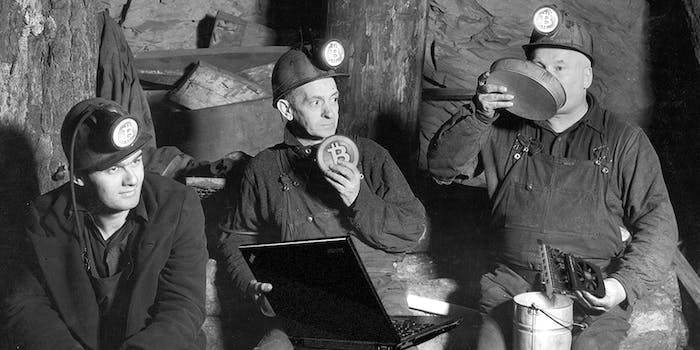 In a mad quest to amass some dicey digital money, some people are building seriously shady computer rigs.

In a mad quest to amass some dicey digital money, some people are building computer rigs so ridiculous they could literally burn a house down.

Bitcoin mining is the process through which the untraceable crypto-currency, popular in the darker corners of the Web, is generated through complex mathematical problems that maintain the network’s public logbook of transactions. The logbook is called the block chain, and without it, Bitcoin users would not be able to accurately tell whether their coin is legitimate or if it’s been spent twice. 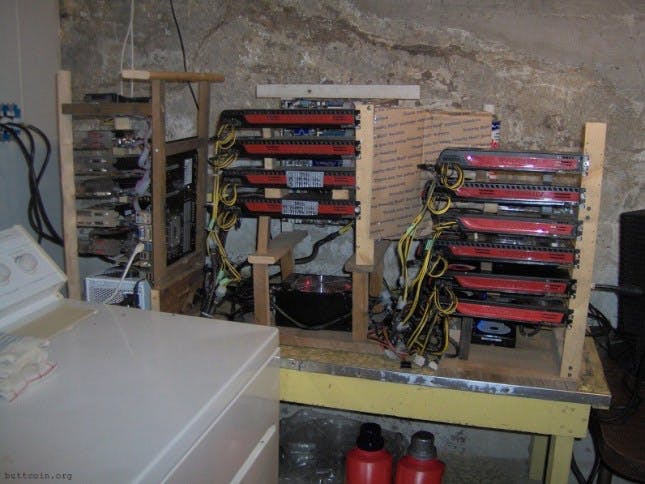 Miners are automatically awarded 25 bitcoins for every block of mathematical problems solved—a figure determined by the Bitcoin community that will decrease as more blocks are mined. The mathematical problems are self-regulating and “only get harder as miners throw more and more collective computing power at them,” Gizmodo reported. Most miners have traditionally work in pools where the 25-bitcoin reward is split up into fairly small portions.

But as Bitcoin has surged, crashed, and slowly climbed back into the international spotlight—thanks to the precarious financial situation in Europe and increased press coverage—some have broken away from the pack and turned their homes inside out, investing in computers capable of solving thousands of mathematical problems at once. 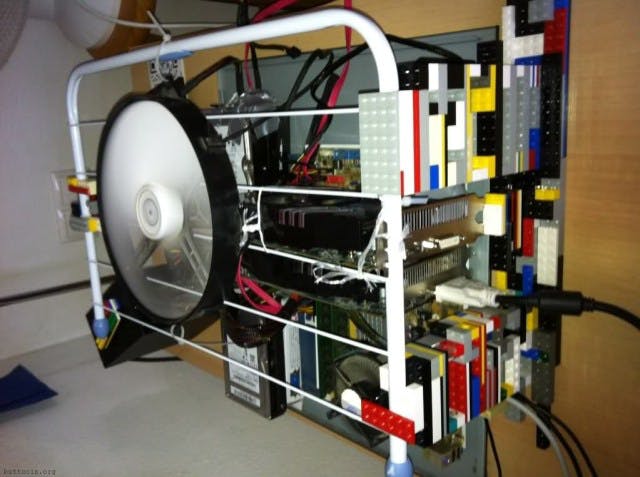 As a result, a “hilarious trainwreck and an unwinnable hardware arms race” has been created, according to killhamster, who runs the Bitcoin parody site Buttcoin.

While some have resorted to purchasing professionally made Bitcoin mining rigs online from anywhere between $1,800 to $2,500, other computer scientists have created 21st century Frankensteins, crammed with graphics cards, wires, and junk from their basements. 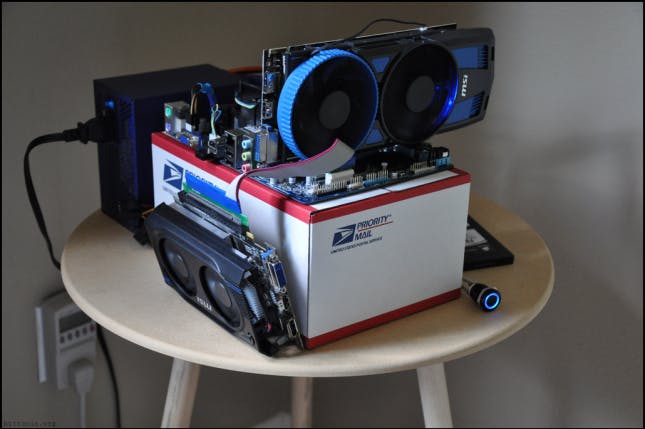 “[People were] stuffing computer cases (or bare motherboards held together with twine and Megabloks) full of video cards, rigging together many of these, and then driving up the power bill and room temperature in an attempt to win more Bitcoins,” Killhamster said. “The profit margins are so thin (or at least they were until the current bubble started to inflate) that people would skip out on things like cases, monitors, keyboards, proper cooling, and safety.”

The result in some cases has been deadly. 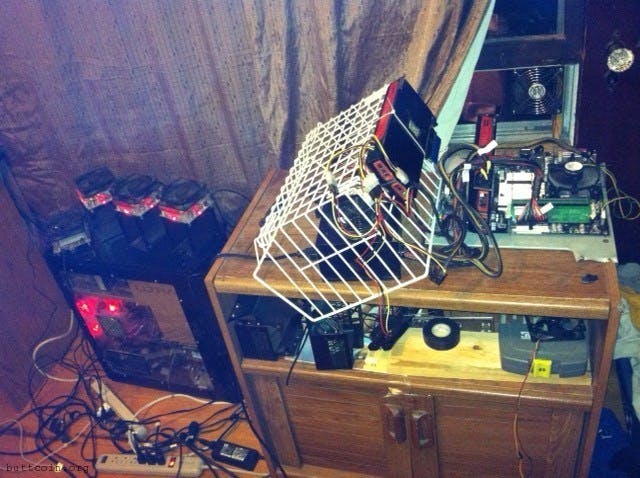 In January, the home of a Bitcoin miner in Ottawa, Canada, burned to the ground accidentally after an alleged soldering accident. The fire started in the back of the home and spread to the front, causing $300,000 in estimated damages, Ottawa’s CTV reported.

Is Bitcoin mining actually worth the financial and physical risk?

Killhamster doesn’t seem to think so.

“Bitcoin mining is more or less a glorified lottery and building these absurd computers is akin to buying thousands and thousands of dollars’ worth of lotto tickets in the hopes that one of them will return a couple hundred bucks every now and then,” Killhamster added. “The Bitcoin website really should have the number for Gamblers’ Anonymous prominently displayed on it somewhere.”

To get a sense of where Killhamster’s coming from, check out some of these gnarly mining rigs, which look like accidents just waiting to happen. 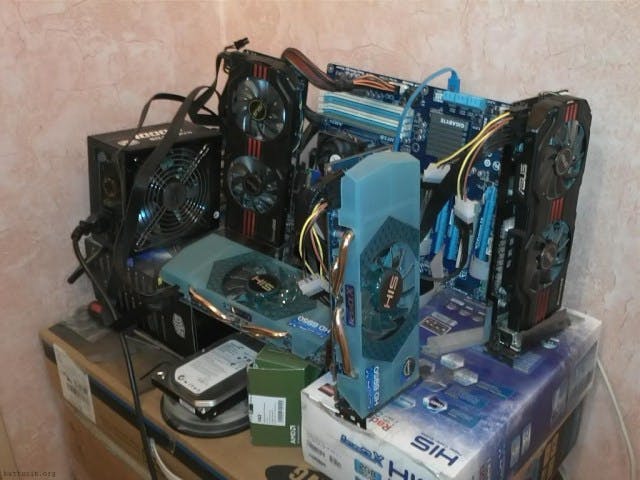 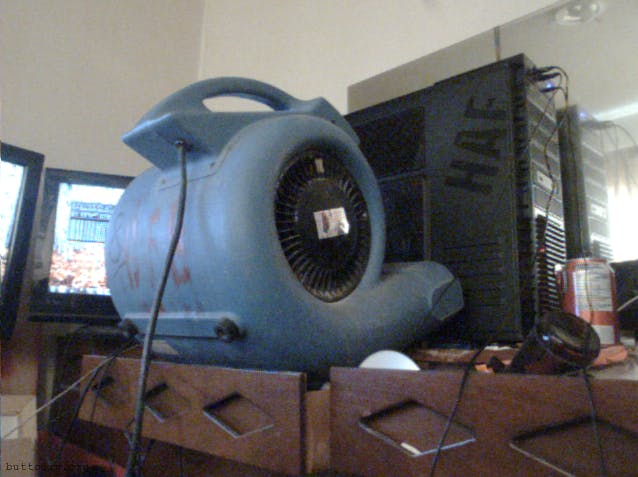 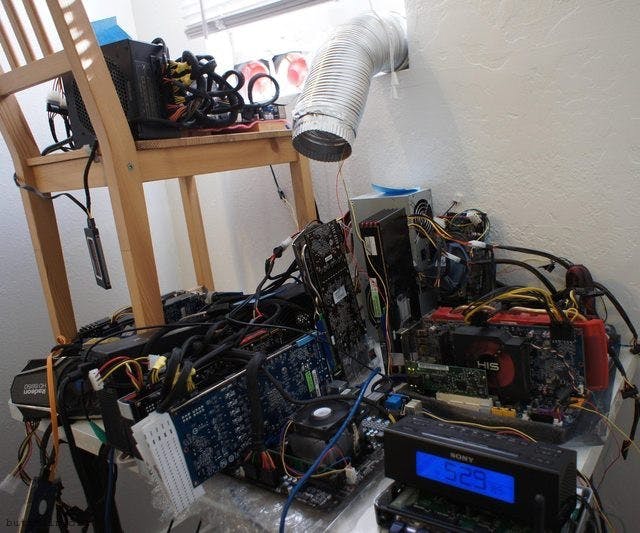