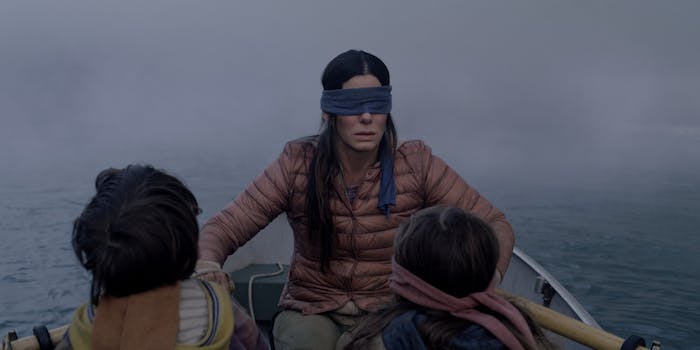 A ‘Bird Box’ sequel is in the works

It's based on a sequel novel by the same author.

Netflix‘s smash-hit horror thriller Bird Box is, perhaps unsurprisingly, getting a sequel. Released in late 2018, the original film supposedly had 45 million viewers during its first week on Netflix, and while that number is disputed (what counts as a “view,” anyway?) it’s definitely seen as one of the platform’s most popular original films, resulting in a ton of social media buzz at the time.

Starring Sandra Bullock in the lead role, the post-apocalyptic thriller was based on a novel by Josh Malerman. The sequel novel comes out next week, and Malerman has already confirmed that Netflix is working on an adaptation. “I can’t say much, but I can say that it is in development,” he told Inverse. “Sometimes it’s weird, all this secrecy, but I’m game.” He started writing the sequel novel after seeing the Bird Box movie in 2018.

The first movie ended with the heroine Malorie (Sandra Bullock) reaching safety with her two children, and the second book, titled Malorie, picks up where that story left off. It begins with Malorie at the school for the blind, before jumping forward 10 years into the future, encountering another group of survivors.

Bird Box was directed by Susanne Bier with a screenplay by Eric Heisserer (Arrival), but it’s unclear whether they’d return for the sequel. However, Sandra Bullock is sure to reprise her leading role, since it’s hard to imagine a sequel without her.