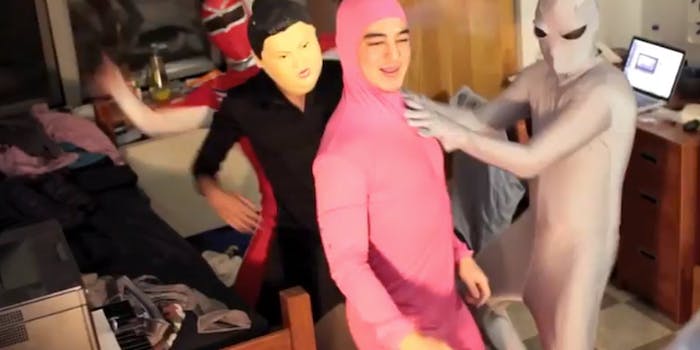 What’s the Harlem Shake, and why is everyone doing it?

It's the dance craze that's destined to annoy you even more than Gangnam Style!

We’re just a couple months into 2013—and Psy’s retirement of “Gangnam Style”—and we already have a new dance craze taking over YouTube.

It’s called the “Harlem Shake,” and it’s actually been around longer than you think.

The Harlem Shake originated in 1981 in Harlem with a man who goes by the name “Al B,” according to Uproxx. Al B explained in 2003 that the Harlem Shake was “a drunken state, it’s an alcoholic shake, but it’s fantastic, everybody loves it and everybody appreciates it.”

The early-era Harlem Shake involves pivoting one shoulder while simultaneously popping out the other, and it’s been around on YouTube as early as 2006, when rapper Mase included the dance in his music video for “Welcome Back.”

But in the year 2013, it’s turned into something even simpler.

The Harlem Shake that has captivated the Internet is set to the first 30 seconds of Bauuer’s “Harlem Shake,” a heavy bass instrumental track uploaded to YouTube on Aug. 23, 2012.

The video starts out with one person, who is usually masked, dancing to “Harlem Shake,” while the other participants go about their business as if nothing is happening. The bass drops about 15 seconds into the song, and then it’s pandemonium. Everyone’s dancing in outrageous costumes and masks. Some hump the air, while others perform the Bernie, the Twerk, or even the original Harlem Shake.

There are really no set rules as to what moves you dance your heart out with.

This craze in particular appeared online about two weeks ago in a video by Filthy Frank as part of “FILTHY COMPILATION #6 – SMELL MY FINGERS.” Viewers were fascinated by the four costumed figures that appear in the first 30 seconds of the compilation, so Filthy Frank posted that video on its own a few days later.

That video has since been viewed over 2.3 million times and spawned countless variations and parodies by everyone from the Norwegian military, to the Peanuts gang, to My Little Pony: Friendship is Magic, and even firemen inside their trucks.

It has yet to show any signs of stopping. Reddit’s r/harlemshake is over 11,000 redditors strong, and along with sharing the many different versions of the Harlem Shake, they, like many of us, try to figure out what it is about the craze that has resonated with the masses.

Someone even created a White House petition that called for a Harlem Shake video from the Obama administration (including the president), which had about 150 signatures before it was removed for violating the site’s Terms of Participation.

But what is it about the Harlem Shake that makes it so ripe for parodies?

Unlike “Gangnam Style”—or other viral darlings “Call Me Maybe” and “Somebody That I Used to Know”—the original Harlem Shake video doesn’t have the feel of a professional music video. You don’t need to have a professional setup (or even know how to dance), and since “Harlem Shake” is instrumental, you don’t even have to lip sync. You can make your own version in your bedroom, at work, or underwater if you have a swim team on hand.

And with the meme timed at only 30 seconds, you don’t even have to devote a large amount of time to making the video.

Even though the Harlem Shake only broke out a couple weeks ago, there’s already more than enough to make up a compilation. What’s Trending put out their compilation on Monday, and Ryan Sims stitched 49 different Harlem Shake video into one condensed video in the meme’s version of “TL;DR.”

Now that you’ve had your overload of the Harlem Shake, it’s time to set it down before it gets too popular (and gets on everyone else’s nerves).