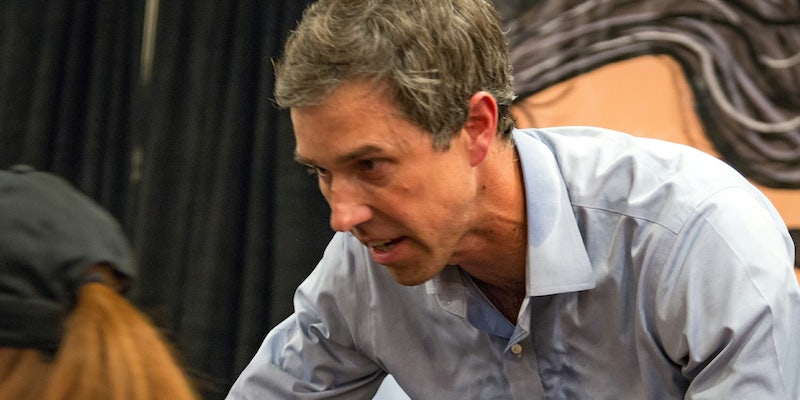 Beto's not really listening... or is he?

A week after being narrowly defeated by incumbent Ted Cruz at his run for Senate, Beto O’Rourke listened to a mix on Spotify full of appropriate motivational jams including Queen’s “Don’t Stop Me Now,” Ariana Grande’s “thank u, next” and “Love It If We Made It,” by The 1975.

Or at least, a parody account said he did. Alyssa Backes originally created the Beto O’Rourke’s Spotify Twitter account as a joke following his election loss.

Now, it has 13,000 followers and counting. She garnered the first 11,000 followers within five days. Its profile photo is one of O’Rourke and the bio simply says, “does not reflect the actual music beto listens to.”

But that doesn’t mean people haven’t relished in it.

“I made it to try and cheer people up after Beto’s loss in the midterms,” Backes, who is 18 years old and lives in Minot, North Dakota, told The Daily Dot. “I was bored and thought making the account would just be funny. I was not at all expecting it to be popular or for so many people to love it.”

Backes drew inspiration to create the profile from the now inactive Obama’s Spotify parody account. The two accounts are neck-in-neck in the number of followers they have.

Since its inception, the recent high school grad has tended to the account daily, tweeting out O’Rourke’s assumed playlist updates throughout the day. It’s a mix of funny, trendy, and timely songs being mentioned, often referencing whatever the media is reporting about O’Rourke that day.

For instance, when O’Rourke published a Medium post that was interpreted by some to be the first step in a presidential bid, Backes referenced a mix of songs including “Mr. Brightside,” “Can’t Be Tamed” and “Back in Black.” She tweeted about 30 times that day.

“I’ve done a few songs that reflect what’s happening in the news,” Backes explained. “I’ve posted a song called ‘Poor Boy’ by The Regrettes, which is a song they released after Dr. Christine Blasey Ford’s trial, protesting Kavanaugh. I also posted a song called ‘Love It if We Made It’ by The 1975, which talks about all the modern day issues we are facing in America, all from police brutality to the country’s tense relations with North Korea.”

Despite living more than a thousand miles away from her favorite politician, Backes became a fan because of O’Rourke’s views on issues including equality and gun safety.

“I discovered him because everyone online was talking about him,” she explained. “So, I listened to his speeches and researched him and that’s when I began to love him.”

Backes, like a lot of other people, became more politically engaged around the time President Trump was elected into office. She says “mass shootings, police brutality, sexual assault, and blatant racism and xenophobia” have contributed to her newfound passion and is considering majoring in political science when she starts attending college.

“Major recent events have definitely motivated me more than ever to become politically aware and try my best to make a difference in the world,” Backes said. “I know that I’m still young, and have a lot more to learn, but I’m trying my best to make my voice heard and make the world a better place.”

And as long as Beto stays in the national consciousness, Backes will be posting about him.

“I try to tweet as much as I can per day,” Backes said. “It depends on how busy I am. Normally I tweet anywhere from five to 15 times per day. I do it in the moment, or if I think of a song in the moment I’ll tweet it right away, or draft it so I can send it out later.”

Of course, despite the politician’s former punk rock roots, Backes’ Twitter caricature of O’Rourke skews a bit edgier than his own Spotify persona. Her most popular song choice, “beto is currently listening to thank u, next by ariana grande (again),” doesn’t exactly align with O’Rourke’s own tastes.

In October of 2017, the Texan started a playlist called “BBQ for Beto.” It’s laced with tracks by Fugazi, Husker Du, Buzzcocks and At The Drive In. But there’s still a lot of hit singles and nine tracks by The Beatles. Either way, it’s way more vanilla than the 18-year-old’s version.

But that’s not to say there’s no overlap—both O’Rourke’s parody account and the actual O’Rourke have listed tracks by Queen, Guns N’ Roses, Bob Dylan, The Rolling Stones, and Johnny Cash.

The Daily Dot reached out to O’Rourke’s about the parody, but did not receive a response.

Backes’ newfound online popularity has become a running joke with her friends, but she doesn’t dare try to break down the concept to her parents.

“My sister knows about it, but my parents don’t really know anything about Twitter or social media and probably wouldn’t understand it,” she said. So I haven’t really explained it to them.”

As for what she hopes to come out of this account? To keep making people smile, to see a successful Beto 2020 campaign and one last request—“I’d also appreciate if Beto would follow me back.”