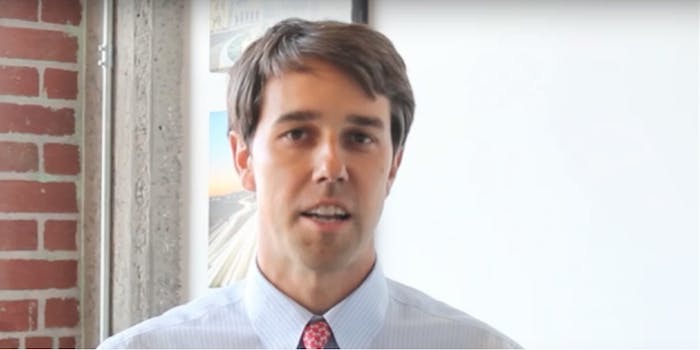 O'Rourke is wearing a beanie, of course.

Now that Rep. Beto O’Rourke has won the Texas Senate primary, and is hoping to unseat Ted Cruz, people are going to start digging deeper into his past—and his present. So we’ll get the most damning evidence out of the way.

O’Rourke is from El Paso, Texas, and it’s long been known he played in punk bands. In the ’90s he played in a band called Foss with Cedric Bixler-Zavala, a member of beloved El Paso punk export At the Drive-In. In 1994, Foss appeared on cable access show Let’s Get Real, and, as was the style for ’90s post-hardcore bands, three of the members (O’Rourke is on bass) are wearing T-shirts, while one is wearing a suit.

“They’ve got another little tune here to play for us,” says the host, who just seconds later is asking them to “Hurry up, guys, the show’s about over.” In another clip, the guitarist joins the host on the couch for some classic ’90s cable access call-ins.

Cruz is already coming after O’Rourke’s nickname and dropped a bizarre radio ad last night, a sign of the fight to come. Pair this clip with Cruz’s 1992 off-Broadway role in The Crucible when you make your decision in November.