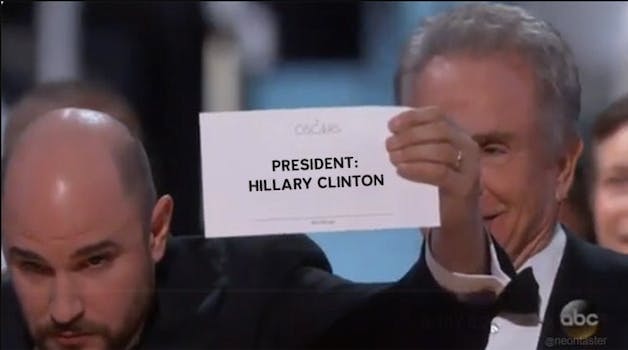 Image via Ryan For Recovery/Twitter

The award for best meme of the 2017 Oscars goes to…

If 'La La Land' can win without winning, why can't 'Bee Movie?'

If you thought that the Oscars accidentally awarding Best Picture to La La Land for a brief instance would light the meme community on fire, well, you’d be exactly right.

Nearly the instant the dust settled on the dust-up, the Twitter meme factory went into full production. The most obvious jokes were about people and teams everyone thought had a win in the bag who went on to lose, like Hillary Clinton in the 2016 election or the Atlanta Falcons in the Super Bowl.

But if La La Land (which lots of people thought was bad) could win, what other awful movies (or bands) deserved a Best Picture win?

Thus, and the Oscar goes to… meme:

And the Oscar goes to… ¡¡MARTHA!! #Oscars pic.twitter.com/1kwFLw97Tj

wow i can't believe it pic.twitter.com/bHUV8DYrsJ

Inevitably, some brands got into the act.

Of course, there were references to Steve Harvey’s infamous viral screw up.

"And the Oscar goes to…" #oscars pic.twitter.com/56ofquwFio