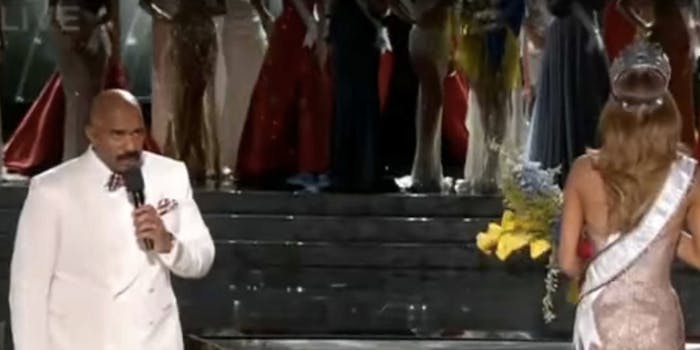 These are some third-degree burns.

Experiencing the pinnacle of her career, a crowned Gutierrez was blowing kisses to the crowd when Harvey interrupted saying, “There’s… I have to apologize.” In the most awkward moment in live television history (and that includes this other Steve Harvey moment on Family Feud), Gutierrez was uncrowned and Wurtzbach was awarded the now-sullied title.

Harvey was rightfully embarrassed of his gaffe, holding up the title card saying, “I will take responsibility for this, it was my mistake.”

Notice how they arrange everything on the card to make the chance of a f*ck up very low. #MissUniverse2015 https://t.co/Fk2H9AWX7C

Of course, the Internet pounced on the author of Think Like A Man, Act Like A Lady, and the #MissUniverse2015 jokes came pouring in.

When you announce the wrong #MissUniverse2015, then apologize to Columbia University and the New Testament instead. pic.twitter.com/HtOt9mu67r

"I apologize to Ms. Thessalonians for my human error…" pic.twitter.com/VyH8fBTFOK

In case you missed the #MissUniverse2015, here's a gif! pic.twitter.com/jMphhX2Ru8

Is it too late now to say Sorry? #MissUniverse2015 pic.twitter.com/7HJJqLxJ0O

Life comes at you fast. pic.twitter.com/oWLNMFQRir

When u steal someone's tweet and end up getting more RTs than the original. pic.twitter.com/TJy7UPtNjj

Damn. Harvey’s never coming back from this.