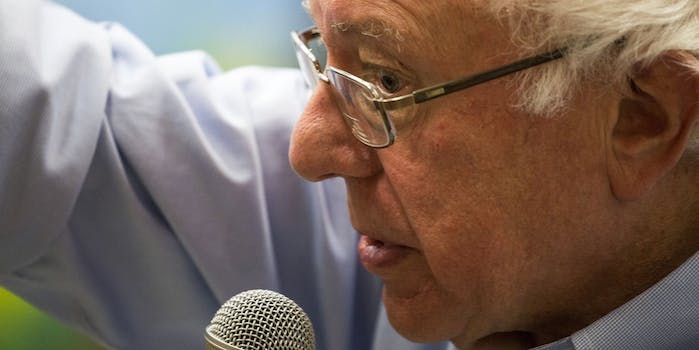 I’ve taken hundreds of L’s in my life. I’ve been made a fool of by sports teams collapsing under the weight of their own hubris; I’ve watched helplessly from the sidelines as good legislation is mollified and expunged by bad politicians with sharp tongues; I was once rejected from a job that required me to write a haiku about the application process.

But I don’t think I’ll ever get used to it. Losing sucks. What’s your favorite coping method? Do you ball it up in the pit of your stomach and stare at the ceiling? Do you sputter a series of cantankerous, blame-shoveling jokes that you don’t really want to laugh at? When the Chargers would lose I used to go replay the game in Madden to make them win—a very futile way to regain a small bit of my pride. In some ways, I think we are at our most human and our most desperate after suffering a loss. Which is why the Bernie Sanders subreddit is particularly thrilling right now.

Let’s be clear: The people who supported Bernie have absolutely nothing to be ashamed about. The man ran a brilliant campaign and proved that you can be a progressive lifer and still make a real dent in the system. But it’s over. Sanders couldn’t quite pull the delegates together, and Hillary Clinton’s fame and establishment won out in the end.

The Bernie subreddit has been in flames over the past couple of weeks, and things came to a head on Monday, after Sanders gave his official concession/endorsement speech at the National Convention. Bernie support—especially here, at the bitter end—has always been defined by a slight tinge of fanaticism, but now that everyone’s favorite progressive has thrown in the towel, they’re in full-on riot mode.

The morning after Bernie’s speech, head moderator “Vermonthy_Python” announced he was closing the subreddit? Why? Because he was now filtering actual death threats made against Bernie Sanders. The post has since been deleted, but the dogged reporters at Vocativ have the transcript.

“The subreddit has lost its purpose,” Python wrote. “There is no more President to campaign for. It is just too much work and too much stress. Too many trolls and too much conflict. Supporters who understand Bernie’s message have long-since left to fight for progressives in Congress, and only trolls and opponents remain. We spend all our time banning and deleting posts from Donald Trump and Clinton supporters, trying to turn us against one another, and every comment section is flooded with hate, conspiracy, and campaigning for other candidates. Unfortunately, we cannot continue to allow the movement and the community to become anti-Bernie and to devolve any further.”

The subreddit didn’t end up getting shut down, and Python was probably overreacting after one bad night (he’s since stepped down as head moderator). But the community is still on fire, particularly in light of the recent DNC leaks. Everyone, of course, knows the breach of ethics disclosed in those emails is shitty—even if the majority of them seem to come from May and April, when a Hillary nomination was a foregone conclusion—but there’s this attitude that there was a real, insidious and (most importantly) effective conspiracy against the Sanders campaign.

You don’t need some blogger to tell you that the contemptible biases on the inside of the Democratic party aren’t proof of a comprehensively rigged election—just like you don’t need me to tell you that blaming a couple close state primary losses on “voter fraud” is hilariously trite. But I do think there’s something interesting to witness in the current state of the Bernie subreddit. I’m going to assume that this is the first political loss a lot of these kids are suffering, especially considering we’re just now coming off eight years of Obama—which means there’s a lot of anguish, rage, and chapped expostulation. But it’s all rooted in this fresh, inexperienced feeling of humiliation. And that makes sense! 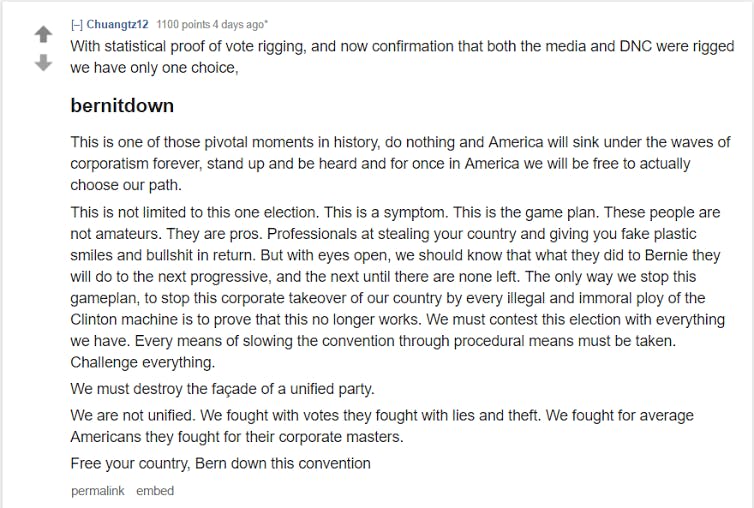 At this point, I’m kinda used to losing. The pain is still bitter, but it’s familiar. But the way this community has immediately sunk into death threats and apocalyptic thinking reminds me of the first time I’d ever been put up against a wall. Getting beat publicly, and then watching your guy admit that he was beat—publicly—is a pretty hard pill to swallow, but it’s also an everlasting part of politics.

I don’t think it’s particularly healthy, but sometimes in life all you’ve got is bleak vengeance and a bunch of your reassuring friends. As we get closer to November I’m super curious to see if some nuance and perspective takes hold, or if the subreddit calcifies into a false-narrative machine. This fucked-up election year keeps giving us great storylines, doesn’t it?