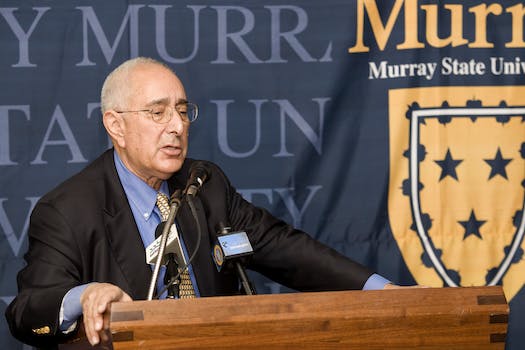 Why Ben Stein is a disgrace to nerds everywhere

America's favorite bespectacled geek has turned into a monster.

Ben Stein’s credibility as a nerd is dead, as Stein’s recent controversial (and patently untrue) claim that President Obama is the “most racist president there has ever been in America” is evidence that he’s departed the critical thinking train. Since nerds seem to rule the world, it’s time for them to come for one of their own.

Ben Stein said Obama was a more racist President than all the Presidents who actually owned slaves. I’m sure his reasoning checks out.

Loving this moment in time where I can tell from y’all that Ben Stein did something wrong but I haven’t looked it up yet.

Ben Stein is mentally unhinged and a deeply hateful and repulsive man. His remarks should be confined to his relatives and the end bar stool

Ben Stein, literally the only thing good you have done in your entire life is say “Bueller…Bueller” in a movie. Go away.

As nerds continue to take over the country—transforming it technologically through the PC and Internet revolution and founding and running its most profitable businesses, while creating many of its most popular movie franchises, TV shows, and other media products—there’s an increasing tendency to defer to people perceived as intelligent authorities with a high degree of critical thinking skills. Extensive experience in a particular arena of endeavor—like science, computing, or economics—is a hallmark of nerdom, which would make Stein seem like a natural fit, except that he’s gone entirely off the rails.

With a premium placed on intellectual credibility, the Internet has taken its duties as an arbiter of fact highly seriously. Of late, hard-nosed researchers have taken down plagiarists like Arizona State historian Matthew C. Whitaker, as well as numerous Chinese college professors, and in the past, their work has uncovered fake degrees and more. Even contributors to the comedy website Cracked are able to identify erroneous news stories disseminated by major publications, illustrating how hard it is to hide.

In short, if you plan on making bold claims and buttressing them with your qualifications, you’d better be ready to back them up. If Stein continues to be taken seriously despite his bizarre recent comments about the president, it will reveal that even in the digital age, our culture will allow men and women acclaimed for having great minds to get away with regularly failing to use their basic intellectual faculties.

Although never a particularly popular celebrity, there was a time when Stein was perceived as the quintessential nerd. After early careers as a lawyer, writer, academic, and presidential speechwriter (under Richard Nixon and Gerald Ford), Stein became a celebrity thanks to a scene-stealing turn playing a comically monotone economics teacher in the 1986 movie Ferris Bueller’s Day Off.

Soon he was one of Hollywood’s regular casting choices for film and TV roles meant to convey braininess—stuffy and dry braininess, to be sure, but braininess nonetheless. Indeed, Stein’s reputation as a cerebral authority figure was so entrenched by the end of the century that for more than five years he was the star of a popular game show, Win Ben Stein’s Money (1997-2003), in which the ultimate challenge facing contestants was to best him in a trivia contest.

Over the past few years, though, Stein’s behavior has developed a disturbing turn: An utter lack of knowledge, paired with poor critical thinking.

In his highly publicized attack on Obama, for example, Stein made a claim that is objectively absurd. Even if one chooses to hypothetically accept his premise that Obama “is purposely trying to use race to divide Americans,” it is inherently illogical to argue that this makes him more racist than the 12 presidents who owned slaves (eight while in office).

Beyond this, America has sported an array of racist presidents: Andrew Jackson, who actively perpetrated genocide against Native Americans; Millard Fillmore, who ran for a second term on an explicitly xenophobic ticket; Rutherford Hayes, who agreed to abandon the slaves freed by the Civil War to the oppression of Jim Crow in return for Southern acquiescence in his theft of the 1876 presidential election; Woodrow Wilson, who introduced segregation to government jobs and openly sympathized with the KKK; Franklin Roosevelt, who ordered the internment of more than 110,000 Japanese-Americans during World War II; Richard Nixon, who obsessively ranted about his hatred of Jews; and Ronald Reagan, who vetoed bipartisan anti-apartheid bills.

Stein’s comments about Obama are part of a larger pattern. In his 2008 pro-creationist documentary Expelled: No Intelligence Allowed, Stein not only opposed a biological fact that is recognized and taught by 99.9 percent of all scientists but argued that Charles Darwin’s theories partially inspired the Holocaust—a claim supported by cherry-picked quotes and a gross misunderstanding of fascism.

Three years earlier, when W. Mark Felt revealed that he was Deep Throat (the anonymous whistleblower who helped bob Woodward and Carl Bernstein of the Washington Post expose the Watergate scandal), Stein decried the trio’s “smug arrogance and contempt” on the grounds that it “hatched the worst nightmare imaginable: genocide.” This was a reference to the Khmer Rouge in Cambodia, who rose to power partially as a result of America’s withdrawal from Vietnam, which began in 1973 due to Nixon’s own policies (Ford was president when they actually took over).

Even if one disregards the brazen illogic of his statements on President Obama, evolution, and the Pol Pot regime, he has made statements that are utterly reprehensible. These range from his classist reasoning in asserting that IMF head Dominique Strauss-Kahn could not have committed an alleged rape (“People who commit crimes tend to be criminals, for example. Can anyone tell me any economists who have been convicted of violent sex crimes?”) to his racist justification of the shootings of Trayvon Martin and Michael Brown.

On the latter, Stein said, “There was a time…when lynchings of African-Americans were not that incredibly rare. Now the lynchings are the police… It’s the very large, so-called victim attacking the policeman who winds up dead.”

Hence the test facing nerds now: By calling out Stein, we have the ability to meet Stein on his own turf, challenging his intellectual status and by extension driving similar scrutiny of other public figures. Nerds aren’t going to lose their sway on American culture any time soon, so it’s important that those who benefit from the image of being a nerd—in Stein’s case, by receiving automatic credibility as a respectable thinker on important political and social issues—use that privilege responsibly.

Should Stein walk away from his Obama comments with his credibility intact, we will sending the message that active use of critical thinking skills for understanding and enjoying the world isn’t really essential to being a nerd. That’s a precedent we should be unwilling to set.

Photo via Murray State/Flickr (CC BY 2.0)