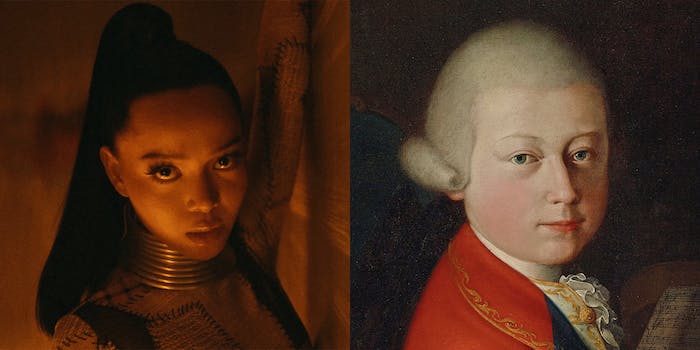 No, Bella Poarch didn’t steal her song ‘Build a B*tch’ from Mozart

A viral hoax accused the TikTok star of plagiarizing her debut single.

TikTok star Bella Poarch‘s debut single “Build a Bitch” is a jaunty pop track with a catchy hook. But according to a popular conspiracy theory, Poarch stole that tune from Mozart.

Racking up more than 15 million views, one viral TikTok compares “Build a Bitch” to a piano track that’s simply described as “Mozart.” The two tunes do indeed sound identical:

There are a bunch of videos along these lines, some of which are explicitly tongue-in-cheek. That’s because the music they’re sampling isn’t a piece by Mozart. It’s literally a piano cover of “Build a Bitch,” which certainly explains why the two tracks sound so similar. If you’re at all familiar with Mozart’s music, you’ll notice that the piano track just doesn’t sound like something composed in the 18th century.

This trend seems to be half-hoax, half-trolling. The TikTok we posted above is pretty straightforward, inviting credulous viewers to believe Bella Poarch stole the song. And some people clearly fell for it. Meanwhile, other videos openly satirize the aesthetic of ill-informed TikTok PSAs. For instance, here’s one that uses an artificial harpsichord and says Poarch plagiarized a song titled “Build a Wench.”

The “Bella Poarch stole from Mozart” meme was probably inspired by people accusing Poarch of stealing from other artists like Bebe Rexha and Louis Tomlinson. In turn, that inspired popular TikToks debunking the comparisons.

The reality is that catchy pop songs often can sound pretty similar because they’re working with the same musical ingredients while aiming for a similar sound. But that doesn’t actually amount to plagiarism. Meanwhile, artists like Kelis and Ludacris have directly sampled Mozart without controversy, offering a new spin on 350-year-old tunes.