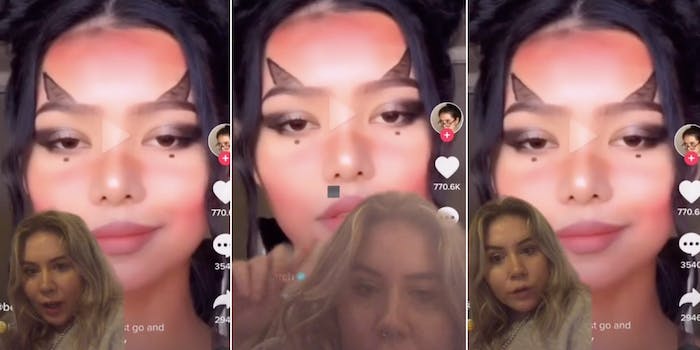 Did Bella Poarch sell her soul to the Illuminati for TikTok clout?

This TikTok conspiracy theorist thinks so.

Just six months after posting her first TikTok, Bella Poarch has become one of the video platform’s biggest stars. The purportedly 19-year-old influencer has accumulated nearly 40 million TikTok followers off the strength of her hip-hop lip-sync videos, including an August post featuring Millie B’s viral hit “M to the B” that earned a staggering 500 million views and became the most-liked TikTok of all time.

But Poarch’s seemingly overnight success has also raised plenty of eyebrows and generated a fair share of conspiracy theories. Some people believe the TikToker is older than she says—she claims to have joined the Navy in 2017, which would have to make her older than 19 now, since Navy recruits must be at least 17 years old. Others have accused Poarch of being an “industry plant,” since her unremarkable videos seemed to blow up immediately, despite her only joining TikTok in April.

It’s not unprecedented for TikTokers to go viral quickly, and it could be a symptom of so many people being stuck at home during the pandemic with nothing better to do than browse the social app for hours. But some skeptics have concocted a more sinister theory as to why Poarch has ascended to the highest ranks of TikTok stardom in just six months: She sold her soul to the Illuminati for clout.

TikToker @larissadenisee proliferated this theory in early October with a two-part video. The first installment, titled “Bella Poarch Truth Exposed Part 1,” has been viewed more than 5.8 million times. In it, @larissadenisee argues that Poarch’s “childlike persona” is inconsistent with her supposed military background and glosses over apparent accusations of racism levied against the TikToker. The video ends with a big reveal: a picture of Poarch wearing devil makeup.

In Part 2, @larissadenisee explains why this picture is “so fucking relevant.”

“First word that comes to mind when I see this picture is ‘Illuminati,’” she says. “When you become like a member or anything of the Illuminati or you sell your soul to the devil, basically in exchange for like money, power, fame, all that, you give up your soul and you’re supposed to burn in hell, whatever that means.

“And there’s a lot of other conspiracies around this saying that they, like, eat fucking kids, I don’t know,” @larissadenisee continues. “But what I do know is that this right here was literally taken a month before [Poarch] blew up, right after she made her TikTok. So, like, you put the pieces together. Do you see the horns on her head?”

@larissadenisee has no substantial evidence to back up her conspiracy; it’s based solely on vibes. And not everybody is buying it.

“People r saying bella poarch sold her soul to the devil for tiktok numbers but seriously its just the power of one pretty girl and her army of simps,” @qbiebun tweeted.

“Some girl on tik tok is literally telling people that bella poarch sold her soul to the devil for tik tok clout,” @SHROOMTAYLOR tweeted. “And her reasoning is that when she saw a photo of bella, she thought of the word illuminati??? oh my god i hate the internet sometimes AHDJAJD.”

Poarch’s popularity does not appear to have taken a hit since the Illuminati conspiracy theory emerged, as she is currently approaching 40 million TikTok followers. @larissadenisee, meanwhile, has moved on to sharing conspiracy theories about Kurt Cobain and Jeffrey Epstein.