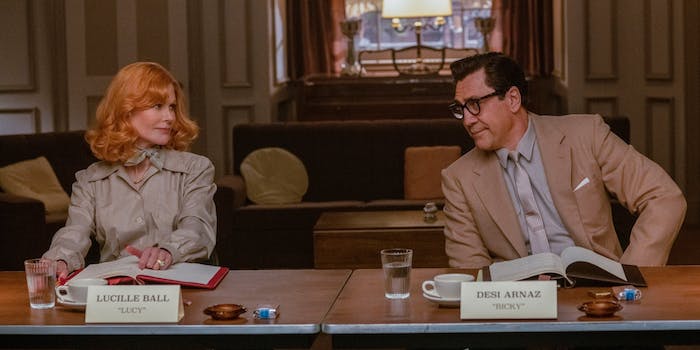 Lucille Ball says the word 'gaslighting' in the film, but how accurate is that?

Warning: This article contains spoilers for Being the Ricardos.

Being the Ricardos, Aaron Sorkin’s new film about Lucille Ball (Nicole Kidman) and Desi Arnaz (Javier Bardem), has been controversial long before it debuted on Amazon Prime Video earlier this week. But the film’s streaming debut is leading to another debate over the use of a single word in the script.

The film condenses three massive scandals—a right-wing radio host revealing that Lucille Ball once checked a box for the Communist Party, a Confidential story detailing allegations of her husband Desi’s alleged infidelity, and the fight to include Lucille’s real-life pregnancy in the show versus writing around it—to play out over the course of one week of I Love Lucy’s production. While the most serious charge is the accusation that Lucille Ball is a communist, she appears to be more preoccupied with the Confidential article, one that’s spread over four pages and is about 1,500 words long; at one point, she can quote the article to Desi verbatim.

Toward the end of the film, after J. Edgar Hoover calls into the I Love Lucy taping to assure the audience and press gathered on the soundstage that Lucille is not a communist (yes, really), Lucille once again asks Desi if he’s cheating on her. Desi, who just pulled off a Hail Mary to save both of their careers, can’t fathom why Lucille’s asking him this now.

“What’s going on with you, honey?” he asks her.

“Don’t gaslight me,” she replies.

For some people, the term gaslighting became commonplace in the wake of the 2016 election, not something people used in 1953. It’s something that author Roxane Gay pointed out in a tweet about the film, noting how much it stood out.

“​​In The Ricardos movie, Lucy says ‘don’t gaslight me’ and it’s so annoying!” she wrote. “There is no way she would have said that in the 1950s. How did that get through?”

Within the context of the film, the dialogue makes sense, even if something about Sorkin writing that word into the script feels off. Lucille asks Desi on at least four different occasions about the Confidential article. The first time, in the film’s first scene, he tells Lucille that the photo in the magazine was taken six months ago during a Westinghouse corporate retreat and that the woman he was photographed with was the niece of someone in attendance. The second time, which occurs less than 10 minutes later, he assures her that he was just on his boat playing cards but also notes that Lucille has bigger things to worry about than his infidelity. On the third occasion, Desi name-checks Red Skelton and Xavier Cugat as two people on the boat with him, friends who would never betray his confidence. And the final time, Desi only admits to cheating on Lucille once she brings out the handkerchiefs but tries to play it down as “they were just call girls” and that “it doesn’t mean anything.”

As a term, gaslighting is derived from the 1944 film Gaslight (and is based on the 1938 play Gas Light), in which a man psychologically tortures his wife to convince her she’s going mad—which includes dimming gaslights—so he’s able to search for jewels hidden in the house. The meaning has changed over the years, and nowadays it’s usually used to describe someone who tries to make another person question their own reality. In many of the replies to Gay’s original tweet, people pointed to the film and the play as proof that “gaslighting” existed before 1953.

Others highlighted two episodes of television that the real Ball worked on. Gaslight is featured in I Love Lucy’s fifth season in the 1956 episode “Lucy Meets Charles Boyer,” which features Gaslight star Charles Boyer playing himself and lying to Lucy about his identity at the suggestion of Ricky Ricardo, effectively gaslighting her. But the reference to Gaslight is more explicit in a season 6 episode of The Lucy Show (the sitcom Ball made after I Love Lucy) in which Lucy gaslights her boss into rehiring a coworker after getting the idea from Gaslight; that episode aired in 1967. It’s also shown up in clinical papers, a Wiliam Goldman novel, an early episode of M*A*S*H, and a Maureen Dowd column from 1995, to name a few places.

So yes, “gaslighting” was used as a term and depicted outside of the film Gaslight. But was it a term that people used colloquially prior to, let’s say, 2016? Or would Lucille Ball have used it in the early ’50s? That’s more up for debate.

“The replies to this from people who know the ’40s origin of the term (as I’m sure Roxane does too) and are trying to argue it was used in the vernacular back then like it is now is a whole gaslighting inception,” Evie Nagy tweeted. And Gay took issue with everyone trying to explain gaslighting to her; for her, it’s not that “gaslighting” existed before 1953, it’s that people weren’t using it the way we do now (or how Kidman’s Lucille Ball did in 1953). And her bigger point was about how the script for Being the Ricardos just isn’t good.

Naturally, the back-and-forth about whether it was realistic for Lucille Ball to accuse her husband of gaslighting her in Being the Ricardos made the term trend on Twitter. On Thursday, Gay deleted her tweets after noticing that “gaslighting” trended because of the response to her original tweet.

“While I’ve been sleeping you guys have made gaslight trend,” she wrote. “This is absurd. You want me to say I am wrong so you can put me in my place? That’s fine. I’m wrong. You experts on I Love Lucy and gaslighting are right. Thanks for the education. Happy Holidays and stay safe out there.”

As far as potential inaccuracies in Being the Ricardos go, Lucille Ball using “gaslighting” might be the least egregious of them.