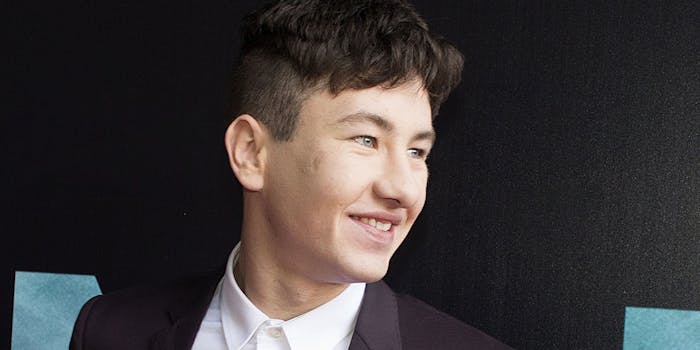 Despite his high billing in 'The Batman' credits, Keoghan has surprisingly little screentime. But it's an important role.

Irish actor Barry Keoghan is a rising star right now, recently playing Druig in Marvel‘s Eternals, following acclaimed performances in dramas like The Killing of a Sacred Deer and Dunkirk. He also has a role in The Batman, getting surprisingly high billing in the credits. But you could easily watch the entire movie without realizing he’s there at all.

Keoghan only appears in one scene, but it’s an important one that lays the groundwork for a sequel. At the end of the movie, we see the incarcerated Riddler (Paul Dano) speaking with another inmate in Arkham Asylum. Officially credited as “Unseen Arkham Prisoner,” this mysterious figure is shrouded in shadows, virtually unrecognizable as Keoghan—but he’s quite clearly meant to be the Joker. He has serious facial scarring, he makes a reference to clowns, and he bursts into a hysterical laugh. Q.E.D.

Barry Keoghan’s brother actually spoiled this casting news on social media last year, but since superhero movies are always plagued by fake casting rumors, this only reached a fraction of Batman fans—and many people assumed it was false. Other reports listed Keoghan as the Gotham cop Stanley Merkel, to the point where there’s actually fanart of him playing a character that doesn’t exist. Meanwhile, The Batman‘s villain-related coverage focused squarely on Paul Dano’s role as the Riddler.

The cat’s definitely out of the bag now, though. In a recent interview, director Matt Reeves even mentioned that they’d filmed another Arkham scene involving Keoghan, Dano, and Robert Pattinson, but it was cut from the film. Possibly he wanted to save the first Batman/Joker interactions for the next movie, allowing the Riddler to stay in the spotlight for this one.

Keoghan’s casting is sure to be divisive because, while the Joker is popular, many fans argue that he’s overexposed. Jared Leto, Joaquin Phoenix, and Heath Ledger loom large in the character’s recent history. And with a sequel to Phoenix’s Joker in the works, Warner Bros. will once again have different versions appear in two big-screen spinoffs at once. This will only increase the complaints that the Batman franchise is too reliant on the Joker, while villains like Poison Ivy still haven’t had a chance at a “mature” reboot.

But despite those inevitable protestations, Barry Keoghan is undeniably great casting. He’s a versatile actor with a proven history of playing chillingly creepy characters (The Killing of a Sacred Deer), and The Batman already sets a different tone from recent adaptations.