The White House's We the People petition website is no stranger to advocates for preposterous things.

The White House’s We the People petition website is no stranger to advocates for preposterous things—like the creation of an actual Death Star, or for each state to mandate an official Pokémon. So obviously, when Warner Bros. announced Thursday that actor Ben Affleck would portray Batman in a future film, a petition soon followed.

The petition, titled “Make it illegal for Ben Affleck to portray Batman (or any superhero) on film for the next 200 years,” was created Friday by a person from Westland, Michigan.

The letter started out with this simple plea ([sic]s all around):

I am asking you Mr. President, to make it illegal for Benjamin Géza Affleck-Boldt (otherwise known as Ben Affleck, or that guy who ruined Dare Devil) to act in or be any part in, any movie related to super heroes.

The reason for this harsh stance?

Ben Affleck should not portray Batman or any other superhero on film or the SyFy network. We are concerned Americans, who care about our fictional heroes, often more than one’s that actually existed.

I am sure Mr. Affleck is a nice enough guy, but he has a history of ruining films that he doesn’t star, direct, produce, and cater by himself.

The White House promptly removed the petition sometime Friday for violating the terms of participation under the site’s moderation policy. Matthew Keys captured a screenshot and posted it on Facebook before it was taken down.

The policy states petitions that “advertise or call for the endorsement or purchase of commercial goods or services, that expressly urge the support or opposition of candidates for elected office” or “that do not address the actions or policies of the federal government” will be deleted.

Apparently the White House and President Obama (or should we say the League of  Assassins and Ra’s al Ghul) didn’t think the future of the Batman franchise was a worthy enough cause.

Then, over on Change.org, a similar petition was opened and closed within hours: 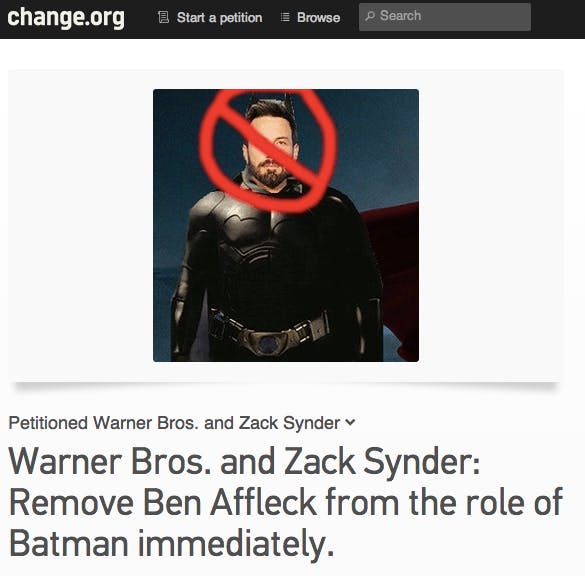