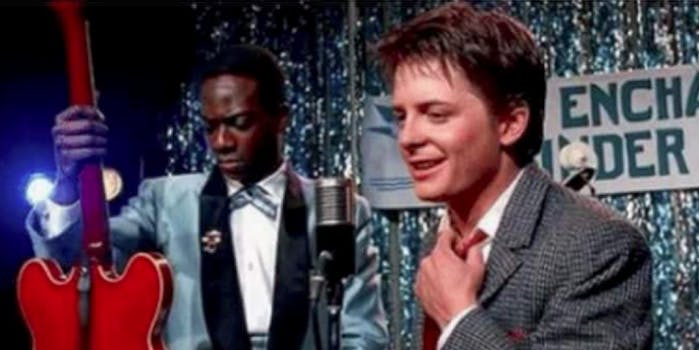 Back to the Future/Universal Pictures

You’re not ready for this ‘Back to the Future’ meme, but your kids will love it

A meme that's ahead of its time.

When Back to the Future came out in 1985, “internet meme culture” wasn’t a thing, and there’s no chance anyone could have predicted it. But that’s one of the points of Back to the Future: if you dropped contemporary culture on the people of 30 years ago, they wouldn’t be ready for it. Recall the scene where Marty McFly (Michael J. Fox) plays heavy-metal guitar riffs for the people of the ’50s—they don’t exactly appreciate it. Well, 30-ish years after the movie’s release, that scene is now a meme.

“Guess you’re not ready for that yet,” Marty sheepishly apologizes. Then he adds, “But your kids are gonna love it.”

A two-panel screengrab of that dialogue is now the de facto meme for talking about anything that didn’t catch on because it was too far ahead of its time. And, you know what? The kids love it. Let’s take a look at some good Back to the Future memes.

Hideo Kojima’s Metal Gear Solid 2 was a little weird when it came out, but it’s now considered visionary, and it’s influenced many game designs of the 2010s.

This happens in movies and TV, too. People are using the Back to the Future meme to appreciate John Carpenter’s The Thing (even though it came out before BttF).

And David Lynch’s Twin Peaks, which is now considered a classic. Last year’s Twin Peaks: The Return finally got the critical praise that the original series missed in the ’90s.

The meme can also be used for ideas that seem a lot more palatable now than they did at their inception. They could be crass, like 9/11 jokes.

Certain things that seem weird as hell now are going to be completely normal, even cool, in the future. The problem is that, without the power of time travel, no one knows which things those are. We’ll have to leave it to our kids to decide.