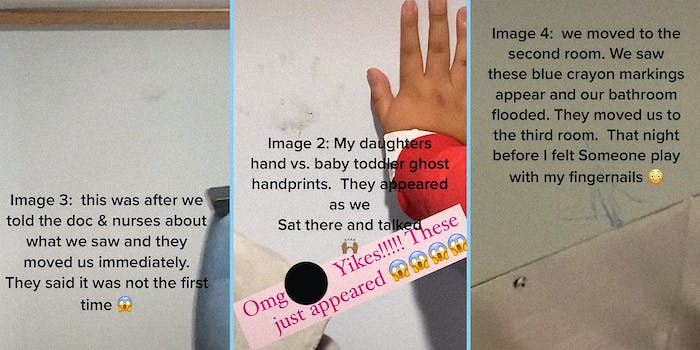 'We were sitting there talking when we noticed these baby handprints on the wall.'

Hospitals aren’t usually known for being comfortable experiences, but one woman was spooked after a recent trip to the hospital led to encounters from what she called a “baby toddler ghost.”

Mary, who goes by @sober_indigenous_mom on TikTok, shared a series of videos about her experience with taking her daughter to the pediatric unit of a hospital starting a couple of weeks ago.

“My daughter got admitted into the pediatric unit at FMC,” she wrote. “We were sitting there talking when we noticed these baby handprints on the wall. They just appeared out of no where. We immediately moved rooms 😱”

In another video that gave her followers a better look at the handprint, Mary’s daughter places her hand next to it for size. And as the doctors and nurses mentioned, it apparently “was not the first time” something like that had happened.

Mary encountered more problems in the second room. The bathroom flooded, and according to Mary, blue crayon marks ended up on the door. She and her daughter were soon moved to a third room, and she says she also felt someone play with her fingernails.

Fortunately, Mary’s daughter was discharged from the hospital and is home safe. Mary told her followers that she burned sage and cedar, but the experience at the hospital left her spooked.

“Just wanted to add that I did have a panic attack after all this had happened,” Mary said. “Took me a while to calm down and I did feel some sort of electric energy on my foot, top of my foot. It was so weird.”

She also learned that because of the pandemic, doctors and nurses haven’t been able to get medicine men to bless the rooms “but it was time, so they’re gonna get one in there now.”