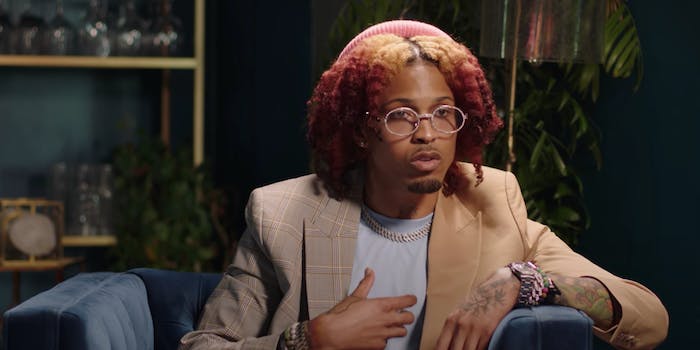 August Alsina said Will Smith 'gave me his blessing.'

Singer August Alsina confirmed he had a relationship with Jada Pinkett Smith after more than a year of rumors about the two.

In a promotional interview for his new album, Alsina spoke with radio personality Angela Yee about his music, love life, and family. When asked about his rumored romance with Jada, the singer said he did have a relationship with her and that her husband Will Smith had actually given him his “blessing.”

The singer seemed to hint that the couple was in an open relationship and referenced their status as “life partners,” rather than married. The couple revealed their new relationship label in 2018.

“I actually sat down with Will and had a conversation due to the transformation from their marriage to life partnership that they’ve spoken of several times…he gave me his blessing, and I totally gave myself to that relationship for years of my life,” he said.

The rumors began to fly about Alsina and Jada Smith after he released “Nunya” in 2019, which seems to reference their relationship. The official video for the song also had a love interest with the name of “Koren,” which is Jada Smith’s middle name, according to Complex.

But at the time of the release, the singer said that the rumors weren’t true, adding “it’s simply just a song.”

He said he’s telling the truth now to clear up questions about his character. He said he’s lost “money, friends, relationships” because of the rumors around the relationship.

“Contrary to what some people may believe, I’m not a troublemaker,” Alsina said during the interview. “I don’t like drama. Drama actually makes me nauseous.”

Twitter went up into flames with the news. At least a few Twitter users judged Will and Jada Smith, saying they wouldn’t want an open relationship.

Some people didn’t understand what the big deal was about the Alsina news, saying that every couple has a different way of approaching a relationship.

“Didn’t Will and Jada basically confirm they’re in an open relationship decades ago and clearly it works because they’ve been married for 24 years,” questioned Twitter user @TitanBaddie. “If adults are entering into consensual sexual relationship with everyone understanding the situation…What is your problem?”

Others, meanwhile, just shared their wishes to be considered as the third partner for either Jada or Will Smith.

The Smiths have not confirmed Alsina’s claim of a relationship.