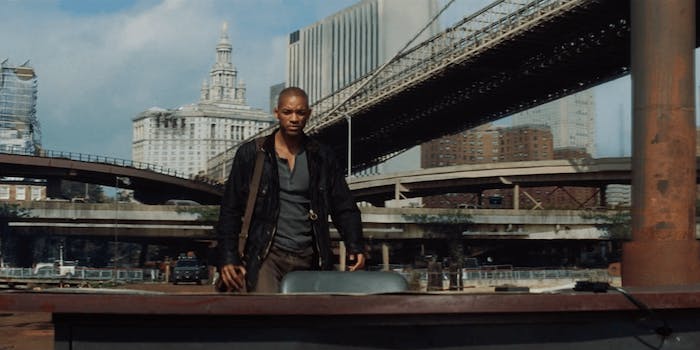 Smith tapped into the temptation to make quarantine more epic than it is.

As the coronavirus outbreak forces millions of people around the world into quarantine, it’s tempting to set lofty isolation goals or picture this time as an epic hero’s journey. In reality, though, the desire to kick back and watch Netflix in our free time often outweighs the motivation to accomplish a Herculean new task. Will Smith tapped into that dichotomy with a pitch-perfect quarantine meme, referencing his character from the 2007 post-apocalyptic thriller I Am Legend.

I Am Legend stars Smith as Dr. Robert Neville, a gun-toting virologist who hunts bloodthirsty mutants infected by a virus that wiped out most of society three years earlier, including his wife and daughter. Neville spends most of his time in self-quarantine, trying to find a cure for the virus and defending himself from these monsters, called Darkseekers. On Instagram last night, Smith shared a photo of a guy laying in bed, scrolling on his phone with the caption “me in quarantine” next to a picture of Neville walking the streets of New York with the caption “the story I will tell my grandchildren.”

Smith joined his wife, Jada Pinkett Smith, on her Facebook Watch show Red Table Talk last month to discuss some of the COVID-19 misinformation that his I Am Legend performance might have inspired. The 51-year-old actor noted that he met with the CDC in preparation for his role as a virologist.

“There was a basic foundational comprehension of viruses and viral pathogens that I developed and it really changed my life and how I looked at the world,” Smith said. “There’s basic concepts that people do not understand.”

Smith’s I Am Legend is the last of three films adapted from Richard Matheson’s 1954 novel of the same name. Previously, Vincent Price played the role in 1964’s The Last Man on Earth, which is one of several pandemic movies available on streaming services now.