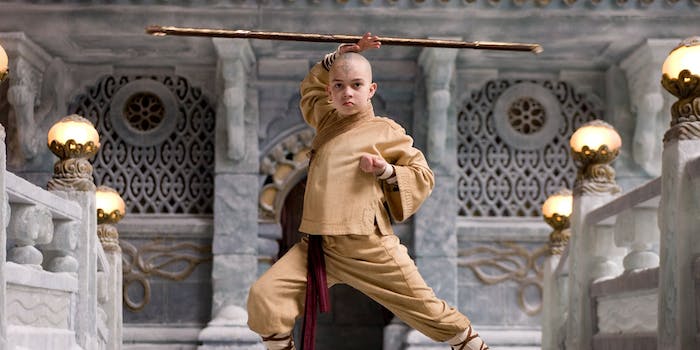 ATLA fans are panicking about Netflix's live-action remake, but the rumors don't have a reliable source.

Avatar: The Last Airbender fans are sharing some alarming rumors about Netflix‘s upcoming live-action adaptation, but right now, there’s no evidence those rumors are true. People are freaking out about Netflix whitewashing the cast or aiming for a “darker tone,” but the original source is not reliable. It’s a blog called Fandomwire, and while it claims to have inside info, well… where does that info come from? Who are these mysterious Netflix sources, and why are they dishing the dirt to Fandomwire of all places? As Avatar fan Klaudia Amenábar points out, some of this “report” closely resembles hypothetical scenarios she speculated about on Twitter. In other words, a fan theory that an unnamed blogger rebranded as news.

The show’s original creators announced yesterday that they were quitting the live-action remake, citing unspecified creative differences with Netflix. This was shocking news for fans, who had already witnessed one notoriously bad adaptation: M. Night Shyamalan’s ATLA movie. Along with being panned by critics, Shyamalan’s Avatar is the poster child for Hollywood whitewashing a film that should star people of color. So naturally, one of the fandom’s biggest fears is that Netflix would do the same thing. This created a perfect atmosphere for rumors like this one to go viral, with fans popularizing the #CancelNetflixATLALiveAction hashtag, and sharing a blog post with incendiary rumors. It’s a perfect piece of bait for hate-clicks.

At the moment though, there’s no reason to believe or share these rumors. All we know for sure is that showrunners Bryan Konietzko and Michael Dante DiMartino chose to leave the project. Their public statements were pretty damning, but they don’t say anything about casting or whitewashing. They just imply that the atmosphere at Netflix had become untenable. As DiMartino put it, “whatever version ends up on-screen, it will not be what Bryan and I had envisioned or intended to make.”

Maybe this dispute is all about the show’s budget. Maybe Netflix wanted to make narrative changes based on algorithmic storytelling patterns. Maybe Netflix does want to make Avatar: The Last Airbender a little more mature, aiming for a YA audience instead of younger kids. However, once again, this is all pure speculation. The whitewashing rumor actually feels like the least plausible option here, because if Netflix is good at one thing, it’s marketing new content to millennial/gen-Z audiences. M. Night Shyamalan’s Avatar movie is so infamous that any whisper of whitewashed casting would be a PR fiasco, and a total non-starter for the show’s target audience.

So the good news is, you can (for now) ignore the fandom controversy about Netflix casting white teens to play Asian children in a gritty, adult-rated Avatar: The Last Airbender remake. But whatever happened behind the scenes, it was still bad enough that the show’s creators chose to quit, leaving Netflix to hire a new showrunner who can toe the company line.