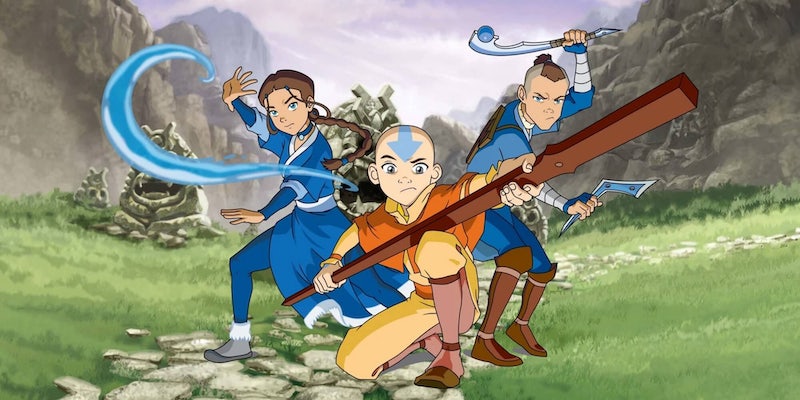 Why you should watch ‘Avatar: The Last Airbender’ on Netflix

This brilliant fantasy show deserves to be as popular as 'Buffy' and 'Game of Thrones.'

Avatar: The Last Airbender’s arrival on Netflix offers a perfect opportunity for me to climb onto my soapbox, whip out my bullhorn, and start talking about how great this show is. Sure, ATLA isn’t exactly an obscure cult classic. Airing for three seasons in the mid-2000s, it gained a sizable fanbase and critical praise. But for various reasons, including the infamously bad movie adaptation, the fact that it’s a Nickelodeon cartoon (“for kids!”), and the plethora of other TV shows vying for attention, many people slept on this genuine masterpiece of fantasy storytelling. If you’re one of those people, now is the time to catch up.

Created by Michael Dante DiMartino and Bryan Konietzko, ATLA‘s world primarily draws from Asian history, mythology, and art, rather than the European background of most mainstream American fantasy media. The story follows a classic Hero’s Journey concept: a young Chosen One must save the world, helped by his friends and mentors. Beautifully animated, with a soundtrack that worms its way into your heart forever, ATLA should be listed alongside Star Wars, Harry Potter, and Buffy the Vampire Slayer as a modern fantasy classic. Its rarest gift is the exceptionally tight plotting, because the showrunners knew they’d have three seasons in total. Each episode is a gem, ranging from goofy comedy to epic wartime tragedy, and the whole is even greater than the sum of its parts.

ATLA’s thoughtful worldbuilding unfurls gradually, beginning with the idea of “bending.” Certain people have the ability to bend one of the four elements (earth, air, fire, and water), a skill that falls somewhere between magic and martial arts. Each bending style has distinctive choreography based on real combat techniques, drawing inspiration from Chinese martial arts media.

Different cultures specialize in different bending styles, and we begin with the Inuit-inspired Southern Water Tribe. Here, two kids—the young waterbender Katara and her goofy brother Sokka—stumble upon a 12-year-old boy frozen inside an iceberg. He turns out to be the long-lost Avatar Aang, a spiritual leader who can master all four elements. One Avatar is reincarnated into every generation, and since Aang was frozen for 100 years, the world has fallen out of balance.

Aang is sweet, optimistic and adventurous, and was raised in an airbender temple, roughly analogous to a Buddhist monastery. He’s shocked to learn his entire culture has been wiped out, leaving him as (yep) the Last Airbender. Now he must prevent the militaristic Fire Nation from taking over the world. The resulting quest takes Aang and his friends across a stunning range of locations and cultures, learning new bending techniques and having fun little adventures. Dozens of characters appear over the show’s 61 episodes, but the most important are Aang, Sokka, Katara, Toph (a blind earthbender girl; one of the show’s comedic highlights) and Zuko, an exiled Fire Nation prince who wants to capture the Avatar and prove his worth as a warrior.

The show’s creators did an incredible job of creating memorable, emotionally complex characters, even in roles that only last one or two episodes. However, Zuko often gets the most hype because he’s such a well-drawn villain. The more we learn about ATLA‘s world, the more we understand how these characters are rooted in a complex political background, with Zuko and Aang at opposite ends of the spectrum. The pacifist, upbeat Aang had a happy childhood and was taught to respect all living things. By nature, he’s friendly and trusting and just wants everyone to have fun. Meanwhile, Zuko was raised to lead a totalitarian state, idolizing a cruel, despotic father who wants his children to be ruthless warriors.

If you had issues with Harry Potter’s “all Slytherins are evil” philosophy (not to mention its total lack of respect for muggles, and the awkward epilogue), ATLA’s attitude to Zuko and the Fire Nation is a welcome rebuttal. While the Fire Nation initially seem like typical villains for a kids’ cartoon—complete with “evil” iconography and a bunch of goons trying to kill the protagonist—we come to understand that Zuko is a product of a toxic upbringing, and the Fire Nation is full of civilians who are just trying to survive. Even though the Avatar is a pivotal figure, we mostly experience the war through its impact on normal everyday people.

If you’re just starting the show on Netflix, here’s some advice. First, avoid spoilers. You should watch the series in order. My other tip is that like many shows, ATLA’s first couple of episodes are pretty light, so you should watch the first three or four at once. (They’re only 20 minutes long, so this isn’t a stretch.) Finally, you may also have heard of Avatar: The Legend of Korra, ATLA’s sequel series. It’s not as consistently brilliant as ATLA, but it’s still great. Set a few decades after ATLA, it stars a teen heroine in a more modern, industrialized setting.

ATLA remains firmly in my top five TV shows of all time, and I often think back to it when reviewing “adult” sci-fi/fantasy media. There’s a widespread misconception that serious long-form drama can’t coexist with humor, optimism, and loving, supportive relationships. The era of Game of Thrones and The Walking Dead marked a trend for extreme violence and grimdark cynicism, with some shows actively avoiding any hint of comedy. (This is especially wild considering the impact of Buffy and Star Trek, which remain hugely popular thanks to their blend of humor and drama.) However, Avatar: The Last Airbender’s status as a children’s show allowed more leeway to deliver a mix of tones.

As a long-form Hero’s Journey story, ATLA rivals The Lord of the Rings. Its character arcs are immensely satisfying, and its worldbuilding lights up the imagination. As a show about war and difficult moral choices, some episodes are truly heartbreaking. But at the same time, ATLA isn’t afraid to be silly. When you’re making a cartoon for 9-year-olds, you’re allowed to include musical side-quests and dumb subplots about kids pulling pranks. The darker themes are always tempered by warmth and humor, which is actually more true to life than unremitting gloom, even in a story involving genocide and authoritarian regimes. It’s realistic for people to make jokes! Optimism and sentimentality shouldn’t be seen as childish!

More than a decade after ATLA aired, this may explain why the show still has such a hold over its fans. Not only is it a straightforwardly excellent, but it delivers something we rarely see on American TV: an intelligent, long-form fantasy drama where the characters are allowed to have fun.