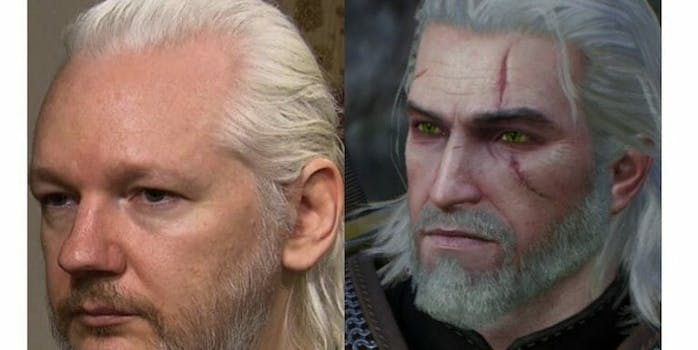 WikiLeaks founder Julian Assange is getting the meme treatment in a serious way right now, thanks entirely to a picture that’s gone viral showing him with a rather amusing hairstyle.

The 45-year-old has been holed up in London’s Ecuadorian embassy for years now, mainly as a means to avoid an investigation into rape allegations lodged against him in Sweden―allegations that were recently dropped―and thus avoid a possible extradition to the U.S.

The image in question isn’t actually new, to be clear. It’s been floating around on the internet since at least 2015, the result of an interview between Assange and Democracy Now’s Amy Goodman. But as so often happens with viral content, it took some time to catch fire. Now, plenty of people are giving their takes on how the silver mullet impacts the “radical transparency” advocate’s look.

Julian assange looks like an npc that would betray u in Skyrim pic.twitter.com/Ho5WfrIU0l

Julian Assange looks like the villain in a movie about ninjas that only has white people in it. pic.twitter.com/pNhueA49YQ

Assange looks like an unsavoury Lannister footman who's just been left alone with a handsome chestnut foal. pic.twitter.com/JGNgRn5zpN

HAIRSTYLIST: What you want?

ASSANGE: My mom's making me a Qui-Gon Jinn costume for Comic Con.

"And finally, Mr. Assange, how much of your time is spent drunkenly purchasing iguanas?" pic.twitter.com/UF08rrdRJR

Can you make me look like the older guy who tells college-aged women they have "old souls?" pic.twitter.com/mAmYcRXTX2

Plenty of people noted Assange’s resemblance to Geralt, the protagonist of a series of books by Polish author Andrzej Sapkowski and also a trilogy of popular video games. Specifically, lots of people thought he had a The Witcher III vibe going on.

Assange looks like he's auditioning to be the worlds' worst Geralt from the Witcher. pic.twitter.com/5CdUQagmXr

That’s not the only reference to a video game to have spawned from this particular image. Just months ago, Assange himself tweeted out a photo of some street art in Melbourne, Australia depicting him as the character “Big Boss” from Metal Gear Solid V, another famously mulleted hero. He seemed to enjoy it.

How cool is this? Melbourne, Australia. pic.twitter.com/7VyyAt9ieo

It’s fair to guess that Twitter will be dragging Assange for the near future, thanks both to his being a highly polarizing and controversial figure and the unabashed goofiness of that picture.

Based on his recent appearance at least, it looks like he’s found somebody at the embassy who knows how to cut hair.