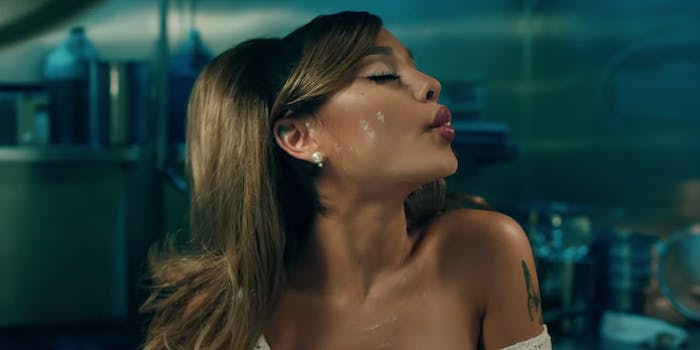 Fans are equally obsessed and turned on.

Grande released her first studio album since 2019’s Thank U, Next early Friday and almost immediately fans dug in and shared their reactions to the desire-filled lyrics.

“Ariana really went in with these lyrics on 34+35. She’s sick,” @tattoosmilee tweeted.

The pop star is leaning into her R&B influences—it’s music far removed from her days on Nickelodeon and her early pop albums. Listeners are equally obsessed and turned on by her uncharacteristic sex talk.

“This is what I wanted,” @JasmynBeKnowing tweeted. “None of that pop stuff.”

Fans are calling the music “Ari&B,” in reference to Grande’s increasing movement toward the R&B genre.

In a viral TikTok, two fans record their shock to “34+35.” It pretty much sums up how fans have been reacting to the album.

Other notable songs on the album include “Nasty,” where she talks about being impatient: “Swear it’s just right for ya/ Like this pussy designed for ya,” she sings softly.

Ariana’s lustful lyrics are also relating to a lot of people feeling sexually repressed in quarantine.

“Ariana really just asked to be fucked till daylight and she’s never been more relatable than [right now]. Go ahead and get your back cracked sis,” @giselle1233 tweeted.

It’s no secret that Grande’s fans are on the younger side, and people are already bringing up the image of those fans at future concerts.

In “My Hair,” Grande makes witty remarks about her famous ponytail as she assures her lover that it’s OK to touch.

“It’s got body and it’s smooth to touch the same way as my skin / So don’t be scared / To run your hands through my… hair,” Grande sings.

This song and general sound of the album also have people sarcastically claiming Grande is Black (again).

The album is not without a softer side. In the last song, “POV,” Grande talks about seeing herself through her lover’s point of view.

It has people emotional.