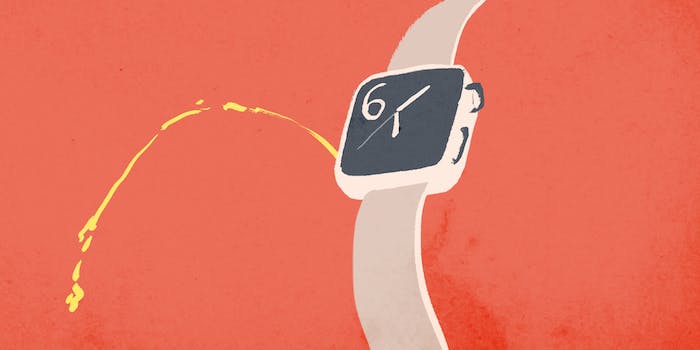 The Apple Watch 2 can piss on you, and some people can’t wait

It's waterproof, but that water has to go somewhere.

While everyone’s busy overhyping the panic about Apple’s new iPhone eliminating the headphone jack, an even more shocking and “courageous” development isn’t getting the attention it deserves. The new Apple Watch Series 2 will be able to piss on you.

Or, at least, that’s how people are describing the waterproof watch’s ability to “eject” liquid through its speakerholes:

New Apple Watch literally has the ability to take a piss on you, ya freaks.

Oh good my Apple Watch will now spit or piss on me.

The Apple Watch 2’s big selling point is that it’s “swimproof,” but water that gets in has to go somewhere, lest it damage the components. And where it goes could be “on you,” if you’re into that sort of thing (that thing being computer piss).

Some people are thinking bigger than just H20, though:

We’ve seen a sports watch before, but Apple’s watersports watch is a definite innovation. What would Steve Jobs think, though?

Don’t care! We’re mere weeks away from the first video of someone actually trying this, and I can’t wait.