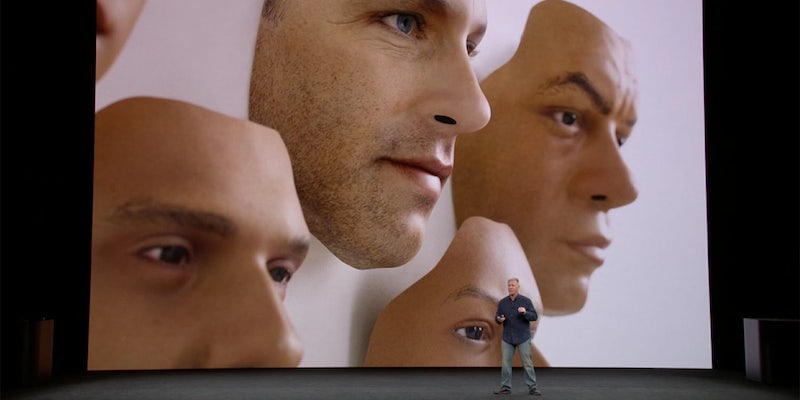 An Apple Event, the only form of corporate pageantry that makes people afraid of spoilers, took place Tuesday at Apple’s new spaceship campus. A new Apple TV streaming box was announced, and so were some new iPhones. As with any major entertainment event, which is what these things have become, some people were just there for the jokes.

here at apple, we've heard your biggest complaint: you're looking for a way to signal that you can spend a thousand dollars on a phone

One of the most mocked new features was the iPhone X’s facial recognition feature, FaceID, which will unlock your phone by scanning your face. Or at least, it’s supposed to. It took two tries in the demonstration, a fact not lost on the audience.

In honor of Steve Jobs, Craig should have thrown that iPhone at someone when it didn't see his face.

RIP to Craig Federighi who will soon die of mysterious causes after failing to demo Face ID on the first try. #AppleEvent

FaceID is an impressive bit of technology, but some are worried that it’s a creepy, dystopian privacy violation waiting to happen. Apple’s wall of disembodied faces is already becoming something of a depressing meme.

"The teams worked hard to protect your face data." Wow, love to be alive in 2017.

This same tech will be used—by someone— to identify protesters, to figure out if you're depressed or manic—and how to monetize that. https://t.co/WuY1oAVfly

100 percent chance the face ID turns out to be racist https://t.co/yTD7G4nr0B

And then, of course, there’s the “Animojis,” large emoji that have facial expressions on them, thanks to the Apple magic of FaceID. The animoji can “read” messages you send to others. You can represent yourself as a talking chicken or a talking poo, as demonstrated on stage by Apple’s Craig Federighi.

Tim Cook, two weeks ago: “Who wants to demo Animoji?”

Everyone slides their chair back, except Craig.

This is one of the weirdest things about FaceID, but it’s not the worst. As some critics have pointed out, facial recognition could be a big enabler for law enforcement and the surveillance state.

As a lawyer, my advice is never ever enable FaceID.

With FaceID, cops can just point your phone at your face while they have you in handcuffs then look through your phone without a warrant.

Cops could shoot someone who was recording them, then use FaceID to unlock that person's phone and delete the video of them shooting.

This same tech will be used—by someone— to identify protesters, to figure out if you're depressed or manic—and how to monetize that. https://t.co/WuY1oAVfly

Wonder if there will be legal issues w police compelling people to unlock their phones. With FaceID the whole consent thing becomes murky.

Here’s the thing about criticizing Apple during their vaunted keynotes, though. If you’re putting energy into livetweeting sick burns, Apple’s already won.

it's impossible to dunk on Apple mid-keynote. if you are watching, they already own you

See you next year.