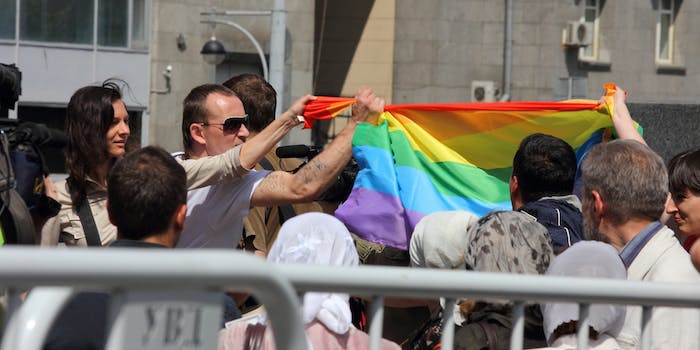 Disturbing video shines a light on anti-gay violence in Russia

It's hard to watch, but this is what gay people in Russia have to live with every day.

Human Rights Watch has released a short film highlighting the homophobic violence and brutal attacks against members of the LGBT community in Russia with just three days before the start of the Winter Olympics in Sochi.

According to HRW, many of these attacks happen in public, and some are set-ups under the pretense of a date. The victims are then humiliated, beaten, and, in the case of one person, captured and forced to sodomize themselves with a bottle at gunpoint.

Much of the footage HRW collected for the short film was uploaded to YouTube and various Russian social networks by the attackers themselves in order to humiliate the victims even further.

“People think that an LGBT person is not a human being, but simply a toy they can play with,” Gleb Latnik, a Russian LGBT activist, said. “If such a person is walking down the street, they think, ‘Why not punch him?’”

And while the violence occurring on camera is a criminal offense, no action is being taken against the vigilantes. HRW wants Russia to prosecute those committing violent acts.

The LGBT community has faced much scrutiny and violence since the country passed legislation that made spreading “propaganda” about non-traditional marriage to minors illegal.

Due to the policies, many have spoken out against President Vladimir Putin and suggested boycotting the Olympics in Russia. More recently, a Russian version of gay dating site Grindr was hacked and blocked for anyone in Sochi and the nearby city Adler.

Warning: This video contains disturbing images and scenes of violence.