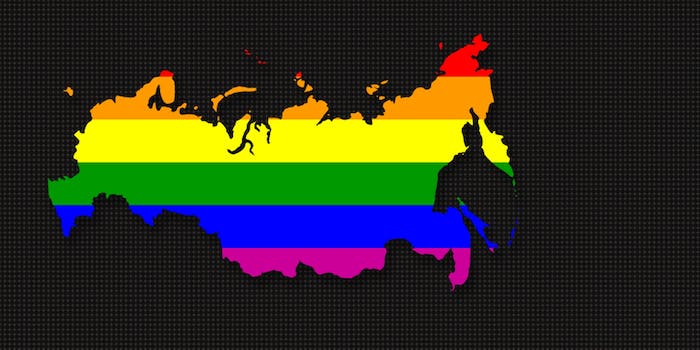 In Russia, LGBT teens are being targeted by “pedophile fighters”

Vladimir Putin’s crusade against the LGBT community in Russia has been well-documented. He just signed a law banning gay couples from adopting. In April, a law was proposed by St. Petersburg city council member Vitaly Milonov, that would criminalize gay “propaganda” and pro-gay speech among minors. It was signed into law last month. It could also be used to detain gay tourists, which should make Russia’s 2014 Winter Olympics in Sochi interesting.

This is all allegedly part of the Russian government’s attempt to put more focus on the Orthodox Christian church and family values, even as European attitudes about same-sex marriage are changing. And now Putin has more supporters, henchmen who are essentially aiding in government-sponsored homophobia.

The popular social network VK has been used to organize and galvanize hate groups across Russia, with little to no interference from police. A former skinhead named Maxim Martsinkevich is now leading a crusade against homosexuals, and his followers are documenting it videos and photos, which are then uploaded to the VK groups Occupy Pedophilia and Occupy Kamensky.

Martsinkevich and his ultra-nationalist allies consider themselves vigilantes, or “pedophile fighters,” and use fake social media profiles to lure teenage boys to public places, then videotape them as they’re being bullied and harassed. In the video below, the boy is allegedly 15 years old. For 20 minutes, the men shame him for his sexual preference, then eventually pour urine on him. It’s not easy to watch.

This is coming on the heels of the torture and murder of a 23-year-old man in Volgograd in May. No one was charged in the murder, even after one suspect told police he’d tortured the man. Many LGBT youths, after being bullied by extremists or seeing their pictures online, have committed suicide. Russian police are often complicit in these attacks and rarely investigate or charge the men involved. Pavel Durov, VK’s founder, lives in America, and has not commented on the hate group’s activity. VK accounts are often deactivated, but never for long.

A Change.org petition has been created to call out Russian officials, like Milonov, for civil rights violations.