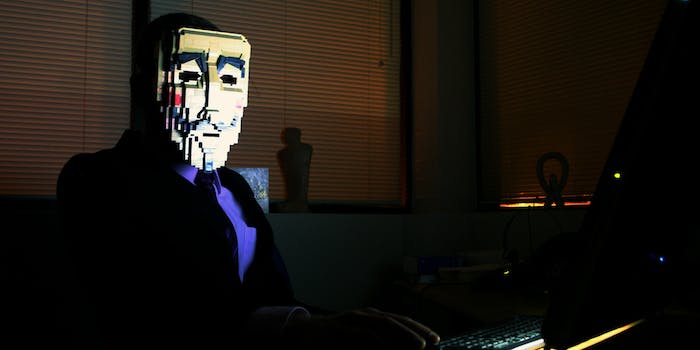 Does Anonymous have too much power?

Painting the loosely-organized hacker collective Anonymous as superheroes of the digital age is often too easy. Watch as our masked avengers go after hate groups! Look on in awe as they attack despotic dictators! Feel a pride in humanity as they demand justice for rape victims! There are times where it seems Anonymous never rose out of the seedy depths of 4chan but from the moral heights of the Marvel Universe.

However, at the risk of sounding like the skeptical police chief in a comic book movie, we have to wonder whether those who commit good behind masks can be completely trusted. For the most part, Anonymous appears to be a well-intentioned group bent on vigilante justice, “an army of Batmen.” But what happens when the group’s imperfect ideals don’t line up with our own morals as a society?

There are times where it seems Anonymous never rose out of the seedy depths of 4chan but from the moral heights of the Marvel Universe.

This week, Anonymous announced their own theft of over 800 social media accounts believed to be held by members of ISIS, the vast and brutal terrorist network currently working on pissing off as many powerful nations as they can. No matter how you spin it, this is a moral win—ISIS sustains itself with a concerted recruiting effort across social media, so our heroes seem to have hit the bad guys right where it hurts.

But is the enemy of my enemy really my friend? What Anonymous has brought upon these Twitter and Facebook accounts is censorship. Censorship of a brutal and evil organization, but still censorship. And they’ve done so with no elective power, no chance to reverse their decision, and no investigation as to whether these accounts truly did have anything to do with ISIS. Due to the group’s very structure (or lack thereof), Anonymous’ actions can never be questioned by we mere mortals.

Anonymous’ actions fly in the face of Twitter’s mission to be an active, open field of communication for all parties. In the words of CEO Dick Costolo, “Whenever you have a global public information channel, you’re going to use it for good, and some people are going to use it for nefarious purposes.” Anonymous isn’t necessarily contradicting Twitter—the social media site has banned accounts for posting beheading videos, for instance—but they are taking into their own hands what should be the job of the site’s administrators and government officials.

But if the worst cost of Anonymous’ actions is a group that represents cruel barbarism has less of a voice, maybe we should just trust Anonymous. Maybe they really are the masked saviors of our Saturday morning dreams, taking down the bad guys and reminding us to eat our veggies. As long as they’re actions only hurt those who wish to spread evil in this world, why not applaud their efforts?

On more than one occasion, Anonymous has found the collateral damage of their efforts outshining any good they may have done. Back in 2013, Anonymous pushed the unreported rape of a Steubenville High School student on to the front page by releasing the identities of the suspects and even a video of the boys joking about the rape. The attention led to not just the conviction of the named suspects but the indictment of school officials who knew and did not report the heinous crime.

Maybe they really are the masked saviors of our Saturday morning dreams, taking down the bad guys and reminding us to eat our veggies.

A job well done, right? When Anonymous has attempted to repeat the success they had in Steubenville, they’ve often enough found themselves spreading their powers in reckless ways. The first comes amid the tragic story of Amanda Todd, a Canadian 7th grader who, in 2012, took her own life after she was talked into undressing in front of a webcam hosted by a child pornographer. Anonymous responded by doxxing and naming not just one wrong suspect but two, publicly accusing them of a vicious act without considering the consequences they might bring upon innocent bystanders. In fact, Canadian officials largely accused Anonymous of just getting in the way, calling them “people who appear to be trying to use Amanda’s story to do harm or make a profit.”

In a similar vein, the group tried and failed to insert itself into the controversy surrounding the shooting of Michael Brown in Ferguson, Mo., and the overloaded police response to protests. Mirroring the folly of Redditors who tried and failed to name suspects in the Boston Marathon bombing, Anonymous falsely accused a Ferguson police officer of shooting Michael Brown—despite numerous claims and protests from the police department that, logic should have dictated, would eventually have to release the name of Brown’s shooter anyway.

Both these cases show the inherent problems with a vigilante service. While dramatic and satisfying to the frustrated and disenfranchised, the mob mentality enforced by Anonymous’ lack of clear moral foundation lacks the purposefully paced nature of our actual criminal justice system. It’s makes one wonder whether the Guy Fawkes masks are less to hide their identities from the targets of Anonymous and more to absolve themselves from their own mistakes.

This lack of responsibility shows itself in their actions, as well. Far from just fighting terrorists and rapists, Anonymous has also used its powers—which really just come from its numbers—to prop itself up. When the security firm HBGary announced they had infiltrated Anonymous, the group responded by releasing thousands of documents related to the firm, including personal and financial information of employees.

Similarly, Anonymous regularly takes on cases that aren’t so morally unambiguous as their fight against ISIS or North Korea. In late 2010, Anonymous launched “Operation Payback” which had a moving goalpost of an enemies list, ranging from the MPAA to Mastercard and Visa to the military prison holding whistleblower Chelsea Manning. Whether these groups deserved targeting is up for debate, but that’s the issue: Anonymous isn’t prone to engage in a debate.

That’s the issue: Anonymous isn’t prone to engage in a debate.

In fact, Anonymous can’t really be challenged at all. Once they’ve assumed the moral authority to police the Internet, it’s rather hard to take it back from them. Of course, most of their targets deliver the meager, DDoS-led damage they face—and in the case of ISIS, they deserve, far, far more. But no one really has a say in how Anonymous makes its next move. If the most basic assumptions about crowd psychology are to be believed, it’s possible not even Anonymous knows.

Here’s a sadly believable situation: Fox News, Rush Limbaugh, the Blaze and a host of other conservatives leap to lambast the President’s proposed net neutrality regulation, dubbing it as they have “Obamacare for the Internet.” Anonymous, perhaps preferring the ideals of net neutrality (though their libertarian nature might say no), decides to take down their respective sites through DDoS attacks, maybe even hacking the Twitter accounts of major conservative news sources. Suddenly, a rogue group of idealists immediately silences a vast portion of the media landscape. While entirely hypothetical, such a scenario illustrates the danger of Anonymous’ particular brand of activism.

It’s very hard to argue with no face. Anonymous is an activist organization and one I generally find myself agreeing with. To borrow a phrase from Jim Gordon, however, they are not the hero we need right now. Heck, they aren’t even the hero we deserve. They are by their own admission a group without constitution or stated causes other than some odd mixture of online rights a la Aaron Schwartz and some perfunctory and slightly exploitative brand of chaotic good. It matters not what an objective observer might think of them because they purposefully lack an identity to be criticized. They are, after all, anonymous.

Photo via Brian Rinker/Flickr (CC BY 2.0)