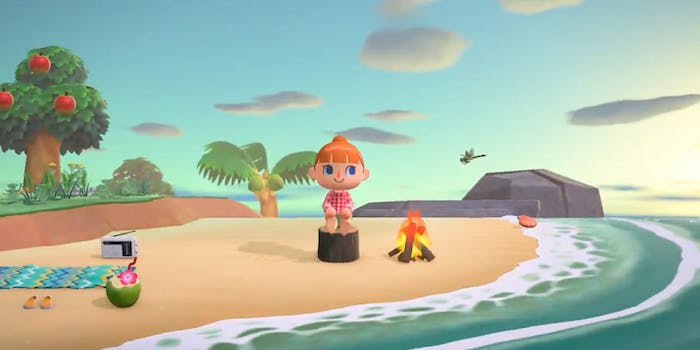 ‘Animal Crossing: New Horizons’ was delayed to 2020, and fans are losing it

Apparently, some people don't want to wait that long.

It’s official: Animal Crossing 2019 is set for Nintendo Switch. Nintendo revealed the next installment in the main series, Animal Crossing: New Horizons, during its E3 2019 Nintendo Direct. Except there’s one problem: it’s actually coming out next year. Whoops.

News broke late Tuesday morning when Nintendo revealed nearly two minutes’ worth of gameplay footage for New Horizons. In the game, players travel to a deserted island and slowly build up a village with their new animal friends. It’s ridiculously wholesome, and the series looks as gorgeous as ever thanks to the Nintendo Switch’s graphical capabilities.

you can have YARDS in ANIMAL CROSSING pic.twitter.com/fQfv6ompPQ

But while there was plenty to love in the trailer, the clip ended on a bittersweet note: while the game was announced for a 2019 release last September, it was delayed today to March 20, 2020. Fans will now have to wait another nine months in order to get their hands on the game. And while some are handling the news well, others are struggling to cope.

“Why did they give us so much hope and then just destroy it?” one Redditor bemoaned.

Animal Crossing fans when they saw that 2020 release date pic.twitter.com/iPHmUZZ1jL

Me thinking about Animal Crossing New Horizons every second of my life until march 2020 pic.twitter.com/PtF5nvgKok

animal crossing really getting pushed back to march 2020 pic.twitter.com/zXDn5qWght

Don’t forget you still need a Switch to play Animal Crossing if you don’t have one already.

Me getting mad about animal crossing switch coming out in 2020 even though I don’t have a switch pic.twitter.com/BZyb9WfgSK

For other fans, a release date from Nintendo is a pretty promising sign, and they’re happy to celebrate: even if they still have to wait a couple months.

the first half of 2020 is jam-packed with games already and the only one that matters is Animal Crossing pic.twitter.com/VfNbE2JWNx

me arriving to the island of Animal Crossing New Horizons pic.twitter.com/qDums7BTvN

All of us after Animal Crossing Switch & Banjo were revealed

Animal Crossing: New Horizons wasn’t the only Nintendo game revealed during E3 2019. Highlights also include Luigi’s Mansion 3 and a sequel to The Legend of Zelda: Breath of the Wild. Gaming icons Banjo & Kazooie are also headed to Super Smash Bros. Ultimate, Nintendo announced today, along with the hero from Dragon Quest.