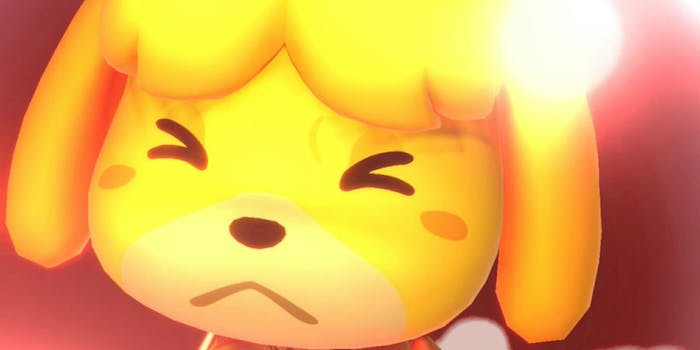 Feeling trampled on by the world around you? Turn to Isabelle the dog from Animal Crossing, the mayor’s doting, diligent secretary and assistant. Cute, sweet, and entirely dedicated to her job, Isabelle serves as one of the main guides throughout Animal Crossing: New Leaf and the video game series’ various spin-offs. She’s basically Leslie Knope in pupper form.

The internet fell in love with Isabelle for a reason: despite being a formidable opponent in Smash, she never comes off as cocky, aggressive, or mean. One of her taunts shows her smiling at the camera and clapping her hands, as if all the punches and blows are just good fun. With Isabelle, what you see is what you get, and what you get is wholesome, positive, and adorable. While some Twitter users like to riff on her innocent nature to show a deeper, unexpected side to her—such as her being, again, stupidly horny on main—others appreciate her for who she is and create endless fanart gushing over her presence.

since ari fans wanna get brave, let me prove a point.

whose done more for the music industry?
rt for Isabelle
like for ariana grande pic.twitter.com/kGbAS13KJM

isabelle coming out of her well to shame mankind pic.twitter.com/sUBDS1eNMg

But just as fast as Isabelle Facts went up, it closed down, leaving its fans wondering what happened to the account.

Isabelle Facts worked by posting fake, numbered “facts” about Isabelle, similar in style to the immensely popular Fake AP Stylebook Twitter account or the slightly cruder Pokémon Facts! Many of its tweets were blatantly queer. In fact, Isabelle Facts’ very first post talked about Isabelle as a canon queer character in Animal Crossing, as she has a crush on both male and female mayors within the game. That tweet, which was seen by the Daily Dot before Isabelle Facts’ closure, earned over 12,000 retweets and 35,000 likes when it was first created, sparking the account’s initial popularity.

In an interview with the Daily Dot before the account’s closure, @isabelIeduh, who is gay and uses they/them pronouns, said they started Isabelle Facts to “spread positivity around!!” The idea came to them while playing Mario Kart, and the account was intended as a “sorta small joke around my inner circle of friends.” They never expected Isabelle Facts to go viral.

“I see Animal Crossing as a whole as a very queer- and trans-inclusive series as it is!!” @isabelIeduh told the Daily Dot during that initial interview. “With the characters being allowed to dress in any gendered clothes and the game not excluding anything from your gender choice! You can basically play as who you see fit! And Isabelle’s popularity of being an innocent dog who just wants to help everyone really fit in!! Myself and friends included are all queer/trans and adore Isabelle as a character and we love the idea she accepts us for who we are!!”

Isabelle Facts’ popularity walked hand-in-hand with fans’ sheer love for Isabelle. One fact from Valentine’s Day claimed: “Isabelle is everyone’s Valentine today!!” Another popular post, fact 68, said Isabelle’s smile “has been proven to help those feeling down” and “radiates so much sunshine and happiness.” That post had over 480 retweets and 1,200 likes in just 24 hours after it was posted, and it was also one of @isabelIeduh’s personal favorites.

“Isabelle cheers me up whenever I feel lost and depressed,” @isabelIeduh told the Daily Dot during the initial interview. “As someone who suffers from depression and anxiety, Animal Crossing really helps me when it comes to calming down from panic attacks or losing myself in a world where a dog wearing a yellow Gucci jacket, or a goat dressed as a clown being so excited to see you again, really takes my mind at ease from the harsh world we live in.”

While Isabelle Facts certainly was wholesome and queer, the account also punched up against right-wing groups that regularly target queer folks. Fact 38 noted Isabelle “punches Nazis.” Another tweet condemned trans-exclusionary radical feminists, or TERFs. But after Isabelle Facts spoke out against TERFs, @isabelIeduh told the Daily Dot that they experienced death threats, culminating in ongoing harassment that proved way too overwhelming for them to manage the account.

“I took Isabelle Facts down after so many death threats I got regarding my one post about TERFs—then eventually any post I previously made, like the trans and gay rights ones,” @isabelIeduh explained after being approached by the Daily Dot after Isabelle Facts’ deactivation. “I took a break for a few days and then saw people saying I was suspended due to mass reports (which was false because I took it down originally if that makes sense). I reactivated to clear rumors and decided I’m going to completely delete because I got way more hate after reactivating than I thought would appear.”

While @isabelIeduh said that they wanted to recreate Isabelle Facts, they aren’t quite sure if they can handle the experience all over again. While similar Isabelle Facts accounts have since popped up, such as @isabellefacts1, they’re also concerned that other users who run their own accounts may face harassment as well.

“It’s mostly positive stuff but I just don’t like the idea people copied it after I received so much shit, I guess? I was too anxious to tell them I didn’t want them making accounts too,” @isabelIeduh told the Daily Dot.

It’s depressing looking back at Isabelle Facts and realizing what happened to its creator, in part because it’s just a microcosm of a much larger problem with harassment on social media. Just over 40 percent of American adults have experienced some form of harassment online, with over 60 percent witnessing harassment aimed at others, according to a 2017 report from the Pew Research Center. Marginalized folks seem to be particularly vulnerable to harassment, too: Amnesty International’s “Toxic Twitter” report from 2018 found 62 percent of women and nonbinary users surveyed experienced form of abusive behavior over Twitter.

Harassment doesn’t just harm its victims, either. In that same Pew Research study, 27 percent of Americans polled said they decided not to post something online after seeing harassment take place. Attacking another person online can cause a ripple effect, silencing those who want to speak out.

“As with what happened with @isabelIefacts, I’ll just remind you. Block any and every TERF you see,” one Isabelle Facts fan, @WerewolfMoms, tweeted. “Their sole existence on Twitter is to mass report trans people because TERFs are a harassment campaign. Nothing more. They are evil people pretending to be feminists.”