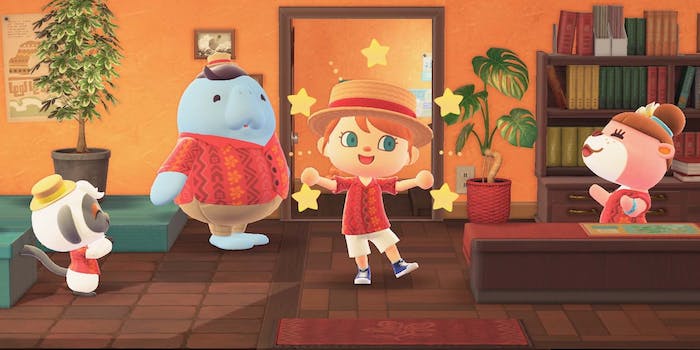 ‘That’s going to be a problem’: Animal Crossing DLC called out for strobe lights scene that could harm folks with epilepsy

'I have basically put my switch face down so I don’t get a migraine.'

Earlier this month, Nintendo released Happy Home Paradise, a new Animal Crossing: New Horizons DLC, an add-on (coming in at $24.99) that allows players to design vacation homes for various clientele. But for some players, the game also came with a sequence that could potentially trigger seizures and migraines.

To “beat” Happy Home Paradise, you need to design 30 vacation homes for the characters who are seeking help from the Paradise Planning Team—which consists of Dottie the Otter, Wardell the manatee, Niko the monkey, and you—and then decorate the final facility. Once you do that, Lottie is prompted into a conversation.

“Now that all of the facilities are complete, we can finally hold our special event!” Lottie says. “It’s been a long road to get to this point, but time just flew right by, didn’t it?”

The special event is a concert hosted on the beach, and the main act, K.K. Slider (embracing his DJ persona), arrives on a float in the ocean to begin the concert. Soon, smoke covers K.K. Slider and starts to flash before the screen turns to white. When we return to the scene, the characters are dancing as the game highlights the various buildings you created over the course of the DLC.

The YouTube channel GameXplain captured what this scene looks like, with the concert segment beginning around the 0:46 mark.

Warning: This video contains strobe lighting and flashes that may be triggering to some viewers.

On Twitter earlier this week, Liz Moore, tweeting at @UntoNuggan, highlighted the issue when they reached the end of the DLC to let others know about the issue before they might encounter it in the game.

“Heads up: the cut scene after you finish all the facilities includes a lot of strobe lights and other flashing,” they wrote. “Fortunately it starts pretty gradually but I have basically put my switch face down so I don’t get a migraine.”

“I was initially enjoying all the glowing lights and mist coming up from the ground,” Moore told the Daily Dot via Twitter DM, speaking about the concert at the end of the game. “Then some of the lights started flashing in sequence, and I had this moment of thinking, ‘Oh no, that’s going to be a problem’ and then K.K. came on screen on a very cool floating stage which was unfortunately covered in strobe lights. That’s about when I turned my switch over so I wouldn’t get a migraine.”

For some people who have epilepsy, videos or GIFs with flashing lights or images can be triggering. According to the Epilepsy Foundation, flashing lights can trigger seizures in about 3% of people who have epilepsy, which is known as photosensitive epilepsy. The World Wide Web Consortium’s guidelines on flashing images suggest that images shouldn’t contain more than three flashes in one second; if it does break that rule, it should come with a warning.

Moore emphasized that photosensitive epilepsy isn’t the only disability affected by strobe lights, adding that flashing lights in video games without warning can also lead to symptoms appearing for migraines, sensory sensitivities such as Autism, and for people with traumatic brain injuries, to name just a few of the conditions affected by it.

Since sharing their experience with Animal Crossing: New Horizons‘ new DLC, Moore said that others have appreciated the warning so they can avoid the kinds of symptoms that can come with exposure to strobe lights. Some have reconsidered purchasing the DLC because of the warning, and Moore noted that strobing lights can be a “huge problem” in whether they can play video games.

But Moore is hoping that game developers take note in making games more accessible for disabled gamers, whether it involves a warning, an opt-out option, or hiring more disabled consultants to help ensure their video games are accessible to everyone.

“I hope Nintendo and other video game companies recognize that they can make cool graphics without a bunch of flashing effects,” Moore said. “More importantly, if they’re really must include some kind of strobe effect, a little warning would be nice? And also the opportunity to opt-out of something that can potentially cause serious medical problems for some of their fan base. Also, I hope that video game developers realize accessibility is an important part of video game design, and consider hiring disabled consultants to ensure their games are accessible.”