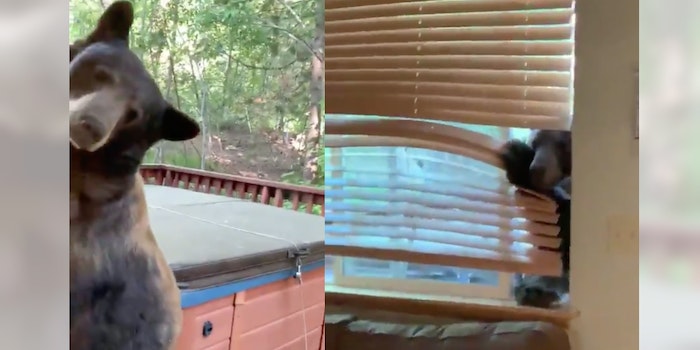 A chaotic video of a bear breaking into a woman’s house is making its rounds on Twitter.

The video shows the bear coming out of the woods and approaching the home. The bear continues to walk around on the porch until it finds a cracked-open window. The woman recording the video attempts to shoo the bear away as it sticks its head inside the window, but despite her efforts, it begins to enter the house right before the woman runs away.

Throughout the whole video, the woman recording can be heard calling for “Angela,” who never makes an appearance in the video–leading Angela to trend on Twitter.

The video ends with the police arriving and yelling “bad bear, bad bear” as the bear runs off into the forest.

Former NFL player George Foster posted the video on July 12, saying he received it from one of his college friends. He called the woman “nuts” for sticking around to film the bear.

“Maybe she felt like she could bounce if need be lol,” Foster wrote in the tweet. “She’s a track girl and is (in) INSANE shape. I still woulda been done dipped lol.”

The video has, of course, prompted many social media reactions. Most of the comments are jokes about the woman continuing to call Angela, who wasn’t willing to hang around to see what the bear was going to do.

Unless her weapon is named Angela, I don’t think she is going to be much help. pic.twitter.com/dRzPNzhZ8h

Others questioned why the woman filmed the bear instead of retreating to safety or checking to make sure the window was closed and locked.

Meanwhile, others mulled over the police’s tactics of yelling “bad bear,” with one social media user contending that it was actually a “pretty good bear.”

Honestly I felt bad for it when the cop yelled "bad bear!" It doesn't need that kind of negativity right now.

It's out there doing bear things! It's being a pretty good bear, actually!