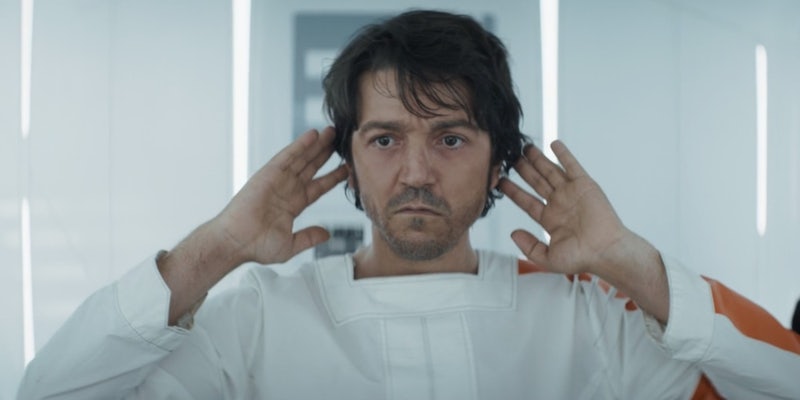 ‘Andor’ episode 8 illustrates why this show is so divisive, exploring the psychological strategy of the Empire’s prison system

Thriving on a compelling but almost dialogue-free performance from Diego Luna, it's the opposite of typical 'Star Wars' TV.

As the ISB investigation into Cassian Andor grinds ahead, Cassian himself has already been arrested under an assumed name, caught up in the galaxy-wide Imperial crackdown. Episode 8 takes him to an prison on the planet Narkina 5; a gleaming paragon of dystopian efficiency, plucked from the fantasies of Jeff Bezos.

Upon arrival, Cassian is sneeringly informed of the prison’s “minimally invasive enforcement techniques.” The threat here is more insidious than beatings or starvation. Inmates go barefoot while the guards wear shoes, leaving the prisoners susceptible to electrocution through the steel floors. Separated into groups of seven, they’re employed as slave labor, manufacturing machinery for the Empire. If a team falls behind, they get zapped.

The Narkina 5 prison is disturbingly well-designed, incentivizing the inmates to compete against each other. It’s a mechanized, streamlined process, guided by a strategic eye for psychological control. It’s also another example of the Empire’s capitalist underpinnings, providing a cheaper workforce than corporate entities like the Pre-Mor Authority. By cracking down on “crime,” the Empire creates more slave labor, who can then be controlled by a skeleton crew of salaried guards. Back on Coruscant, we see ISB commanders haggle over surveillance budgets while Mon Mothma struggles to fund her Rebel allies. Money is a constant concern.

Cassian’s arrival on Narkina 5 illustrates one of Andor’s greatest strengths: Its careful balance between smart exposition and visual/thematic storytelling. Ironically, this quality is why some viewers fail to engage with the show.

The other Star Wars TV spinoffs are extremely simple, often explaining their plot and character arcs directly to the audience. There’s very little in the way of subtext. That’s partly because these shows are aimed at a family audience, and partly because they’re just not very well-written. Much of their appeal ties into fanservice and nostalgia, rather than self-sufficient storytelling. By contrast, Andor features rich political worldbuilding and multilayered characters with complex motives, functioning similarly to adult dramas like Severance or Squid Game.

On the surface, Cassian’s role in episode 8 can be summarized simply: He settles into the prison and learns about his new job in the factory. Obviously, though, there’s a lot more going on here—both in terms of political allegory, and in the interplay between the prisoners. This includes a despotic manager played by Andy Serkis, illustrating how the Empire maintains control over different strata of the workforce.

Throughout all this, the show provides direct exposition when it makes sense in context (i.e. Imperial guards explaining the electrified floor), while exploring Cassian’s role through wordless reactions to his surroundings. During those first few hours on Narkina 5, his fear and misery are palpable. After risking everything to escape the Empire’s clutches, he’s now in an even worse place than before, with no allies and no way of contacting his ailing mother on Ferrix.

Cassian always keeps things close to the chest, and his observational skills come out in full force this week. As he watches his fellow inmates assemble a complicated machine component, we know he’ll quickly figure out how to do his job—and that he’s already analyzing the relationships between the men around him. We saw this ability in action when he was advising the rebels on Aldhani, foreshadowing his talent as a spy.

Diego Luna is so compelling in these scenes—twitchy, watchful, calculating—that it’s honestly a bummer to see the show’s detractors complain that Cassian is “boring” or hard to understand. While these complaints are partly a matter of taste, they also reflect the simplistic way that Star Wars fans are encouraged to interpret these shows. Right now, the discourse is heavily weighted toward Easter eggs, “reveals,” and dramatic setpieces. As a political drama that uses everything from costume design to family conflicts to explore its anti-fascist themes, Andor just can’t be discussed in those terms. The more you pay attention, the more rewarding it is to watch. But if you go in expecting something like The Mandalorian or Obi-Wan Kenobi, it’s just not going to work out.