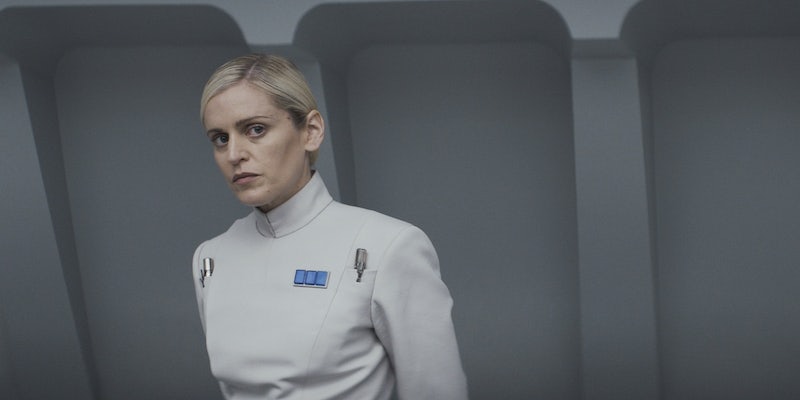 ‘Andor’ episode 7: A chillingly realistic depiction of life under fascism

From government oppression to personal grief, 'Andor' dissects the process of radicalization.

Andor never takes any shortcuts. Described in the terms of a typical franchise spinoff, it’s an origin story for Cassian’s role as a Rebel spy. But Tony Gilroy’s writers tease out every possible angle of what that actually means. From law-and-order crackdowns to the threats against Cassian’s family, the show dissects the radicalization process from cynic to revolutionary.

In order to fight back against an all-powerful empire, a person must be pushed to the brink. Even in the blockbuster fantasy world of the Original Trilogy, George Lucas understood this, beginning Luke’s journey with the death of his adoptive parents. After losing her husband and seeing her home invaded twice by the Empire, Maarva Andor reaches that point in episode 7. Cassian isn’t quite there yet, for reasons we can easily understand.

After a hard life of struggling against forces beyond your control, isn’t it tempting to just move to the beach and ignore the cruelty elsewhere? Unfortunately for Cassian, he can’t switch off the part of his brain that looks out for danger and notices when others are in pain. During a short-lived vacation on the resort planet Niamos, his jumpiness makes him a target. Singled out by Imperial police, he’s arrested and sentenced to six years in prison—a crackdown that resulted from his own actions on Aldhani.

Channeling John le Carré, episode 7’s Coruscant scenes explore how the fallout hits Mon Mothma and the Imperial Security Bureau (ISB). Mon reunites with an old friend, banker Tay Kolma, who hints that he has anti-Imperial sympathies. Taking a potentially unwise risk, she reveals that her milquetoast Coruscant persona is just a ruse, hiding her role as a Rebel conspirator. Tay Kolma is taken aback. When he admitted his own political leanings, he probably didn’t mean that far. While Mon Mothma can seem rather tentative compared to Luthen Rael‘s ruthlessness, this scene highlights her steely resolve, living a double life while fully aware that she’s being followed by the ISB.

Chillingly true to life, the ISB uses the Aldhani attack to extend its own powers. In an emergency meeting helmed by Major Partagaz (Anton Lesser), we hear of plans to expand surveillance and arbitrarily extend criminal sentencing across the galaxy. From here we see the precise chain reaction from bureaucrats discussing audits in chilly white offices to civilians being beaten and jailed on trumped-up charges.

Echoing the Original Trilogy, these scenes make good use of crisply-accented English actors. Much of the ISB strategy is alarmingly close to current British government policies, where any form of public protest can now be classified as a jailable offense. After several episodes that focused on the cruelty and stupidity of low-level cops, the ISB represents something more calculated—particularly with security officer Dedra Meero, who is slowly uncovering Luthen Rael’s spy network by tracking thefts of Imperial hardware. At the top of the foodchain, Major Partagaz keeps the ball rolling by playing his underlings off against each other, always ready with an exquisitely cutting jab: “Do you mind having your integrity ventilated in public?”

Every one of these ISB decisions causes untold pain across the galaxy—and by extension, pushes more people to join the Rebellion. Neatly illustrating the concept of accelerationism, Luthen Rael sees this as a net positive for the Rebel cause. Meanwhile, Cassian is still a cog in the machine. Interestingly, so is Syril Karn. After losing his career in law enforcement, he’s found a boring desk job in the civil service. But while this is theoretically a decent prospect, he’s doomed to sabotage himself once again, propelled by his Javert-like obsession to find Cassian and clear his own name.