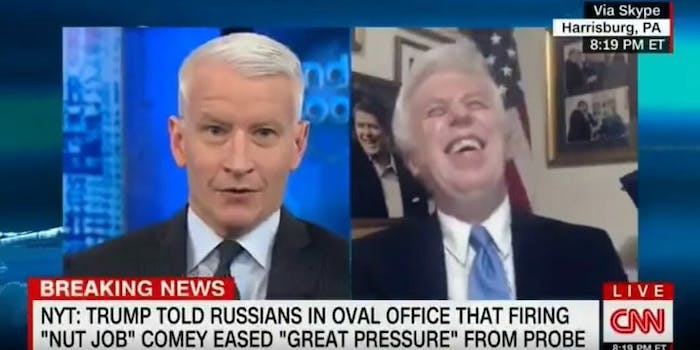 Anderson Cooper to Trump fan, ‘If he took a dump on his desk, you would defend it’

If you thought Anderson Cooper was frustrated before what turned out to be an extraordinary news week for the Donald Trump administration, check him out on Friday evening.

After news broke that the Russia investigation was reaching inside the White House and that Trump reportedly called former FBI director James Comey a “nut job” to the Russians, the same CNN host that brought us the Kellyanne Conway eye roll unveiled a new viral moment.

This time, while interviewing Trump supporter Jeffrey Lord, Cooper said, “If [Trump] took a dump on his desk, you would defend it.”

That insult caused somebody off-camera to laugh, and it sent Lord into hysterics. It was a hellaciously good burn, and it’s something Twitter could appreciate.

If Donald Trump took a dump on his desk, it would be Jeffrey Lord.

Hard to beat the eyeroll, but Anderson Cooper telling Jeffrey Lord: "If he took a dump on his desk, you would defend it" is a close second.

Later, Cooper apologized to Lord for being “crude,” and then Cooper took to Twitter.

I regret the crude sentence i spoke earlier tonight and followed it up by apologizing on air. It was unprofessional. I am genuinely sorry.

Even still, Cooper has joined the annals of cable news history: He is still one of CNN’s biggest ever shit-stirrers.