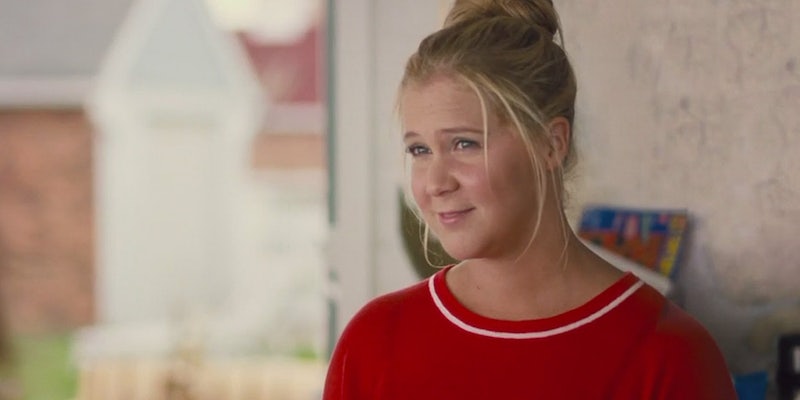 We think celebrities owe it to us to advocate our personal ideals. News flash: They don’t.

Amy Schumer is so hot right now. Sketches from her TV show Inside Amy Schumer, including “Last Fuckable Day” and “Girl, You Don’t Need Make-Up,” have gone viral, and she consistently pushes the envelope with raunchy language and explicit talk about sex and feminist issues.

In short, Schumer is one fierce b*tch who doesn’t shy away from anything.

So it’s no surprise that her fan base skews feminist. It’s a fundamental part of her celebrity brand—her Facebook Fan Page feed includes links to articles titled “Amy Schumer Skewers A Culture That Makes Women Apologize All The Time,” and “Amy Schumer’s Dating Advice for Smart, Funny Girls Who Know What They Want.”

But as it happens, this feminist fan base may be exactly why Schumer’s first feature film, Trainwreck, had so much baggage attached to it by its July 17 release. It’s probably also why the film has experienced so much backlash since it came out—as soon as Trainwreck hit theaters, the Internet swelled with gripes that the film wasn’t feminist enough.

It’s because of headlines like these that I feel obligated to deliver this pressing news flash: Amy Schumer doesn’t owe you a feminist movie. And she certainly doesn’t owe you a movie that meets your specific brand of feminism.

And don’t be fooled—a question of feminism’s many different “brands” is exactly what the Trainwreck debate boils down to. Case in point, while some factions of the media slam Trainwreck for its lack of feminism, others are praising the film for reversing the stereotypical gender roles, dissecting postfeminism, and other perfectly good feminist interpretations.

But whether or not Schumer’s movie is feminist enough is not the point. There is an entitlement that gets attached to celebrities who speak up for feminist causes. It’s a sense that these celebrities will always, consistently, without ever making a mistake or deviating from our personal ideals, be tireless avatars for the cause in every movie, every interview, and every tweet. And that for some reason, this is something these celebrities owe to us.

This entitlement has led to an environment where celebrities are held up and made an example of, for better and for worse. For celebrities who don’t pass the feminist muster, this can cross the line to personal attack.

Take, for example, Kaley Cuoco, who suffered a feminist media blitzkrieg when she said she didn’t consider herself a feminist and enjoys taking on traditional housewife duties. The attacks that followed were nasty, with headlines including “Kaley Cuoco says she’s not a feminist, feminists call her stupid” (Twitchy) and “Kaley Cuoco says she doesn’t consider herself a feminist, eyes roll around the world” (Crushable). Eventually, the backlash drove Cuoco to clarify, then try to explain herself, then apologize, and finally satirize herself in an effort to move out from the shadow of her misstep.

The thing is that Cuoco, nor any other celebrity, doesn’t owe it to you to live the way you want to live. We hope that celebrities we love will share our personal values, sure. And we hope they will use their influence for good.

Likewise, if Schumer writes a character who sleeps with many different men and—over the course of the film—decides that’s not what she wants anymore, well, Schumer has no obligation to make her movie glorify her character’s initial stance, either. She doesn’t even have an obligation to stop her protagonist from dancing with cheerleaders.

Don’t get me wrong. Sexism is not OK, ever. Feminism is a cause worth fighting for. But feminism is no one individual’s initiative to bear. And as fans, we are not entitled to project our agendas onto celebrities and bully them into fighting for our causes for us.

When we do this, we doing more than personally attacking artists we love. We create an environment where the brands of feminism that aren’t included become more important than what the artist got right. It’s an environment where those brave enough to stick their neck out and advocate for feminism are liable to get their heads cut off.

In short, our entitled demands for our own brand of feminism lead to an environment where advocating for feminism is punished, not rewarded.

Lucky for us, Schumer seems to be taking the criticism in stride. When news.com.au brought up controversy surrounding some of her jokes on the Trainwreck promotion tour, Schumer said:

The thing you wind up being burned for is so arbitrary, you have no control, so I’m not even gonna try to manage it. I’m a comedian and I’m going to make stupid, inappropriate jokes, ’cos that’s part of who I am. Once I start checking myself and being PC, I’m dead in the water.

And with all her recent success, the sharp satirical sketches, and growing influence, the last thing I’d want is for a talent like Amy Schumer to be dead in the water. Instead, why don’t we all just dial back the entitlement. We can let each individual, celebrity or not, share their piece, advocate for the works we believe in most, and skip the attacks altogether.