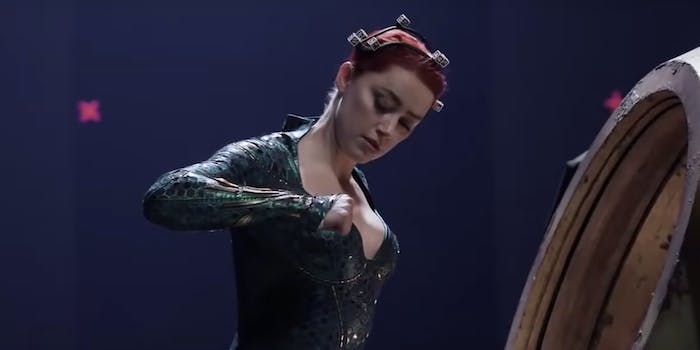 The studio was allegedly more concerned with Heard's lack of chemistry with Jason Momoa.

Both parties in the Depp-Heard defamation lawsuit claim their professional lives suffered due to allegations of domestic abuse. In Depp’s case, he was fired from the Fantastic Beasts franchise after British court ruled that it was “substantially true” to describe him as a “wife-beater.” Meanwhile, Heard says she lost work opportunities due to Depp’s claim that her accusations were a hoax.

During the current lawsuit, Depp accused Heard of harming his chances for another Pirates of the Caribbean sequel—a claim he struggled to prove in court. A relevant Disney executive testified that she wasn’t aware of Heard’s 2018 op-ed about domestic violence (the main impetus for Depp bringing this lawsuit), so it didn’t influence the studio’s decision-making. Around the same time, Depp was reportedly struggling with substance abuse issues, having to be fed his lines through an earpiece while filming, and showing up late to work on the last Pirates movie—a movie that earned disappointing box office results. In other words, there were other factors in play.

This week, the Aquaman franchise had its day in court, with a Warner Bros. executive echoing a similar sentiment to Depp’s Disney executive: Heard’s abuse allegations (and her personal life in general) didn’t have an impact on casting decisions.

Heard testified on May 17 that she had to “fight really hard to keep [her] career” following her split from Depp, alleging that she struggled to retain her role as Mera in Aquaman 2 (2023). She said that her screentime was “pared-down” compared to her earlier expectations. At the same time, she’s faced ongoing backlash from anti-fans demanding that she be fired from the franchise, with 4.5 million signatures appearing on a petition describing her as a domestic abuser.

However, DC franchise boss Walter Hamada said that while the studio considered recasting Heard, it wasn’t due to her personal life or reputation. It was more to do with concerns that she and Jason Momoa “didn’t have a lot of chemistry together.” Hamada said the studio had to “fabricate that chemistry” in post-production—a problem he described as “not uncommon” in Hollywood.

Hamada also stated that the Aquaman sequel was already conceived as a “buddy comedy” between Aquaman and his half-brother and that Heard’s character wasn’t intended to be the co-lead.

As with virtually every element of the lawsuit, this latest update led to a wave of backlash against Heard on social media. If you search for Aquaman on Twitter today, you’ll find wall-to-wall tweets mocking the importance of Heard’s character Mera, deriding Heard’s career, joking about Warner Bros. punishing her for leaking spoilers, and generally expressing glee at the idea of Hamada’s testimony “proving” that she’s a bad or unlikeable actor.

This follows an obvious trend in reactions to the trial: While public opinion is skewed in favor of Depp, the tone of these responses often has less to do with sympathy for Depp (or support for male victims of domestic violence), and more to do with pure vitriol against Heard. For instance, viral TikToks celebrating the possibility of Heard getting fired, or making fun of her for crying on the witness stand while Depp exclaims, “Aquaman!”

Depp fans are also using this Aquaman 2 dispute as further evidence that Heard is a “liar,” even though Depp’s claims about Pirates of the Caribbean were met with similar skepticism in court. Both actors are having trouble proving that their clashing abuse allegations affected their blockbuster careers circa 2018. However, it’s hard to imagine that this lawsuit won’t harm their careers in the future. By bringing this trial in a Virginia county court, Depp guaranteed that it would be live-streamed, resulting in continual coverage and discussion on social media—most of it extremely negative toward Heard.