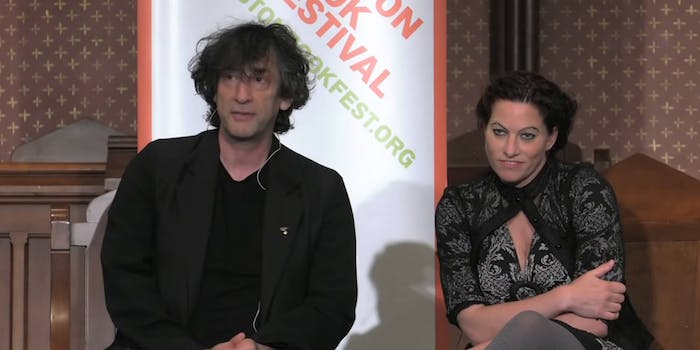 Palmer announced the news on her Patreon.

Musician Amanda Palmer and her husband Neil Gaiman are apparently going through a public uncoupling.

On Sunday night, Palmer posted a blog on her Patreon, to address a question she’d been receiving: “Where’s Neil?” She included a tweet that stated Gaiman, the prolific sci-fi author, had “moved to the U.K.” and that “my heart has been broken.” But she stressed on the blog that ‪”this did not happen because of COVID or lockdown, though the timing is comically bad; other things came to light after we got here to New Zealand.”

The coronavirus is certainly putting a strain on relationships across the globe, but fans and observers were a little confused about the timeline of the breakup, or if it was a breakup. Gaiman posted a tweet Monday morning confirming they are “going through rocky times right now,” and asked for privacy.

Though Twitter speculated, Palmer’s blog likely wasn’t how Gaiman found out. His tweet only stated that he noticed she had “told people.” On April 27, she tweeted out a poll asking for stories of couples going through “breakup/separation/divorce” while in lockdown, but she didn’t get specific. Palmer and Gaiman were married in 2011 and have a son together.

Palmer’s been a frequent agitator and certainly has her detractors (and, apparently, a whole swath of Twitter users who found out about her today as she trended). Meanwhile, Gaiman spent the weekend clarifying his views on author H.P. Lovecraft, after a conversation with sci-fi writer N.K. Jemisin sparked a backlash. The reaction to the breakup news was both sympathetic and insightful.

Of course, celebrating a potential divorce, especially when a young child is involved, isn’t great. But announcing a quarantine uncoupling on a paid subscription platform is its own form of lockdown energy.