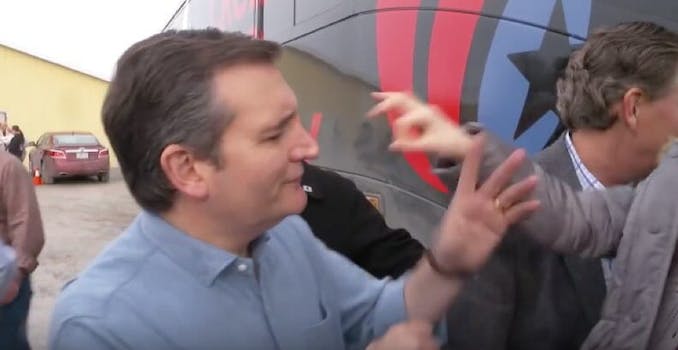 Even on Twitter, no one wants to hug Ted Cruz.

“I don’t hug a total stranger. I have to meet someone, say hello. I gotta start somewhere,” said Jerry Seinfeld earlier this month, explaining why he ducked out of a red-carpet hug from singer Kesha. But that rejection looks positively gentle compared to Alyssa Milano‘s stone-cold diss of Ted Cruz, the Republican junior senator and former mime from Texas.

“~GROUPHUG~ get in,” the actress tweeted Tuesday to her 3 million followers.

Then, on Thursday—the day Senate Republicans revealed a controversial healthcare bill, negotiated in secret, that would make care more expensive for poor Americans while providing tax cuts to the wealthy—Cruz tweeted back: “We all need a hug! 😉”

Milano was not having it. Sorry, Ted, but you’re specifically disinvited from the virtual, 3 million-person group hug.

And then she added this cutting remark:

.@tedcruz but anytime you want to get together to talk about your duty to your constituents, I'd love to chat. People before party.

Cruz is one of four senators who’ve indicated they’d vote no on the healthcare bill revealed today, which may be one reason he needed a hug so much. “As currently drafted, this bill draft does not do nearly enough to lower premiums,” he told CNN.

Cruz has been beating the drum for lower premiums since at least March, meeting with President Donald Trump‘s team, Vice President Mike Pence, and members of the House and Senate. Apparently, his attempts at negotiating fell through.

Defeated, Cruz just wanted to share an imaginary hug with Alyssa Milano and a few million of her closest friends, but he couldn’t even negotiate for that. Rough day, Teddy.

To be fair, though, Cruz is probably used to being denied hugs by now.

And when he does give a hug, it doesn’t always go perfectly:

Politics aside, can you blame Milano for wanting this guy to stay away from a group embrace?