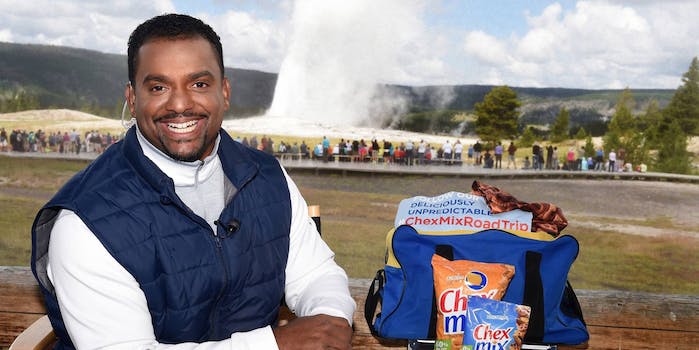 Does Alfonso Ribeiro really love Chex Mix all that much?

In honor of the 100th anniversary of the National Park Service, Gizmodo took readers down memory lane with snacks in tow. Journalist Sophie Kleeman unearthed a treasure trove of Getty photos depicting Alfonso Ribeiro living it up with a shitload of Chex Mix from last summer.

Better known for his role as Carlton on the Fresh Prince of Bel-Air, the actor has spent a majority of his career post-enduring Will Smith saying yes—to game shows, reality shows, and corporate sponsorship. Here, have a look at one of his latest projects.

Filming this #backtoschool video w/ @JCPenney really was as fun as it looks! Take a peek 👀 #ad https://t.co/sCcM6L4re7

I swear to God, the JCPenny jingle and those children dabbing on a bus will haunt my dreams. Ribeiro? Not so much. He’s perfectly innocuous, making him the ultimate spokesperson for any product you throw his way, including Chex Mix. Along with viral stars Eh Bee Family, Ribeiro Carlton-danced his way into an epic vacation.

How many states can the @EhBeeFamily kids get right? Fact: Hollywood is a city. #ChexMixRoadTriphttps://t.co/qmGhxHXGxP

Yesterday doing media for my #ChexMixRoadTrip. Started out at Yellowstone in front of Old Faithful.

Still, the question remains: Does Ribeiro even like Chex Mix all that much? And does it even matter? The new America’s Funniest Home Videos host is raking in the dough and is reportedly worth $5 million. That’s over 330,000 big-ass bags of original Chex Mix.