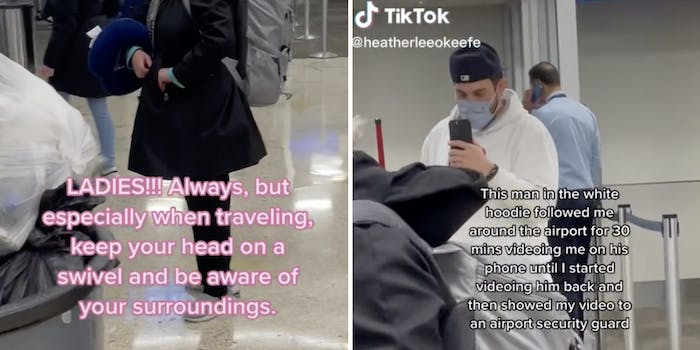 ‘You would be freaked out, too’: TikToker says man followed and videotaped her in airport

'You can never be too cautious about these things.'

A woman on TikTok says a stranger followed her throughout an airport while videotaping her.

The woman, known as Heather O’Keefe (@heatherleeokeefe) on TikTok, shared a video showing the man with his cellphone camera seemingly pointed at her. The video received 4.7 million views as of publishing.

The man, who is wearing a white hoodie in the video, followed O’Keefe around the airport while recording her on his phone for 30 minutes, the TikToker says. He only stopped once she started recording him as well and showed the footage to an airport security guard.

“LADIES!!! Always, but especially when traveling, keep your head on a swivel and be aware of your surroundings,” the TikTok’s on-screen text reads. “If you ever feel unsafe, don’t be afraid to alert the authorities immediately!!!”

Viewers didn’t seem to share the TikToker’s concern for her own safety. Several criticized her for assuming the man was recording her instead of using his phone for something else.

“Meanwhile he’s just FaceTiming with his mom while walking in your same general direction,” one viewer commented on the video.

“Imagine bro is just playing Pokemon go and is scanning the area for Pokemon,” another viewer commented.

“He probably recording for his Insta-story. He’s letting people know he catching flights, not feelings,” one viewer said.

In reply to that comment, O’Keefe wrote, “he was convicted of aggravated stalking, but thank you for your opinion 🙂 have a blessed night.”

Some viewers pointed out that the TikToker did exactly what she accused the man of doing: recording a stranger.

“He’s just doing what you are doing lol,” one TikTok user wrote.

“You videoing someone videoing you. You’re right, he’s wrong? Irony,” another user said.

Still, some viewers defended O’Keefe, saying women need to watch out for their own safety at all times.

“The fact that people are pressed about you protecting yourself is UNREAL. You can never be too cautious about these things,” one TikToker said.

“Do people not understand that at the off chance of something bad happening, you would need proof for authorities to do anything about it?” another TikToker wrote.

Eventually, O’Keefe shared a second TikTok video to explain her viewpoint about the man. She says she first saw the man when they passed each other walking in opposite directions in the airport. Then, out of the corner of her eye, O’Keefe saw the man turn around after he passed her and begin following her with his phone pointed at her.

In the video, she says she made multiple laps around the airport with stops at the bathroom, and the man was always behind her with his phone pointed at her.

“I don’t care who you are, at this point you would be freaked out, too,” O’Keefe says in a third TikTok video.

By then, the TikToker was “really scared” and physically shaking. She says she approached an airport staffer and showed them the video she recorded for her first TikTok. The staffer told O’Keefe to go to airport security.

Security told O’Keefe that if the man followed her on her flight and bothered her, to let a flight attendant know. He did end up being on the same flight, she says.

The TikToker decided to show her recording to the flight attendant, who seemed to sympathize with her. The attendant told O’Keefe she’d inform the pilot and have security meet them when they landed. The attendant also encouraged O’Keefe to file a police report, which she says she did. And according to the TikToker, there was enough evidence for police to begin an investigation of the man.

Even after O’Keefe’s lengthy explanation and story time, some viewers still weren’t convinced. Several asked what exactly the man was being investigated for.

“Investigate for what?” one viewer asked.

Another viewer said, “investigate for what? you failed to put that in your video.”

“You can’t follow someone on a flight bruh,” someone else said.

“The men in your comments saying you’re lying are the same ones that say “well why didn’t you go to police” when something DOES happen,” one user wrote in defense of O’Keefe.

The Daily Dot reached out to O’Keefe via TikTok comment.