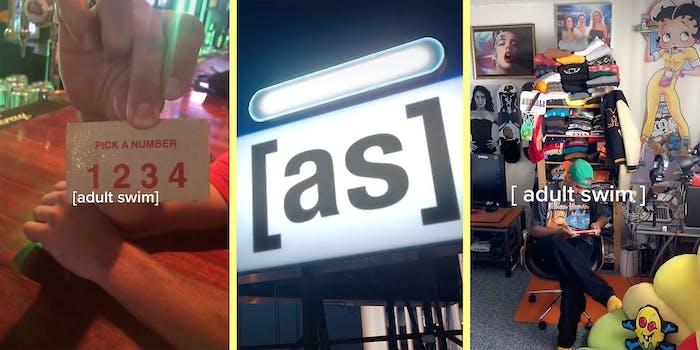 It hits the sweet spot of nostalgia and fresh.

At its best, the Adult Swim bumper is something like an artform. Airing at the tail end of commercial breaks during the network’s late-night programming, the bumps could tie into a certain theme or be a mesh of random music and visuals. Sometimes, they pass by so quickly that you only catch it in the final seconds, leaving you even more confused by what you just saw. Adult Swim made enough of them over the years that it compiled multiple compilations and shared it on YouTube.

But one of the main features of an Adult Swim bump is that they’re incredibly short, which makes the format’s newfound popularity on TikTok all the more fitting.

Given that Adult Swim bumps have evolved over the years, there are few rules to the TikTok trend. At some point, the Adult Swim logo—stylized as [adult swim] or a shortened [as]—appears at some point in the TikTok video. While not necessarily a requirement, BADBADNOTGOOD’s “Time Moves Slow (Vano 3000 Remix),” which has appeared in Adult Swim bumps before, is often used as the soundtrack. Sometimes, a quote that may be aspirational, profound, or might not even make much sense will follow.

Otherwise, the possibilities are endless.

For instance, a fitting TikTok Adult Swim bump could be as simple as filming the flipping of a card in which you pick a number.

Or, as Justin Yang demonstrated, creating a collage of post-it notes to reveal the [as] logo.

Or even adding more of a nostalgia value by putting the [as] logo onto a burned CD.

In one version of the bump, @manaldotcom follows through on request to put the [as] logo behind a painting that fell down.

But the bumps also allow to showcase the level of creativity.

“the adult swim trend on tiktok is the only good thing happening in my life rn,” @RAGGEDYROYAL tweeted.

The Adult Swim bump trend offers something for everyone. For the people who grew up watching Adult Swim on TV, the bump’s resurgence is a wave of nostalgia for staying up late to watch stuff on Adult Swim. But for people who might watch Adult Swim via cable, consume Adult Swim’s programming elsewhere (e.g. a streaming service), or are completely unfamiliar with bumpers as a whole, the format feels novel and fresh.

One entity that’s very much into the trend? Adult Swim itself, which captioned its own iteration of the trend with “We see you.”

“We’ve been talking to you like this for a long time,” Adult Swim wrote in the TikTok video. “It’s nice to see you talking back to us. Let’s keep it going.”