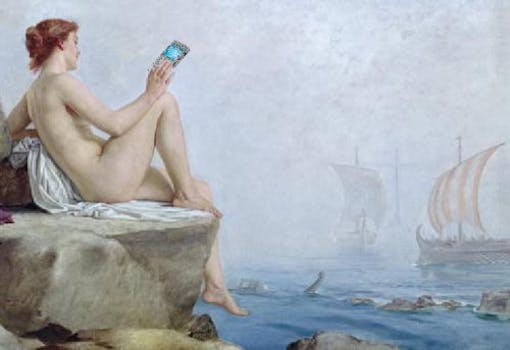 Saving the nude from scandal

Watch out, kids, because you just might grow up to be the next Hester Prynne—Stacie Halas did.

Beware of sexting, kids; a single nude or partially nude photo of yourself is all it takes to ruin your life. But don’t take my word for it; just ask Robert Kinzer, the Massachusetts prosecuting attorney who made headlines after reminding an auditorium full of middle and high school students that if they take and send unclothed pictures of themselves, he’ll have them arrested and prosecuted on various child pornography charges.

Kinzer admonished: “Kids, young adults, even adults who think it is a good idea to take nude or semi-nude photos of themselves on their cell phones and send them to other people via text message,” and “When you send that text message, you have disseminated child pornography [….] We do not have any exceptions in our law for kids who are really in love, for girls who wanted to do it and for guys who promised they wouldn’t share it, or for two kids who are dating. A nude photo of [a minor’s] exposed genitalia is child pornography.”

Laws against child pornography were originally supposed to protect minors, not provide legal justification to destroy their lives. Yet Robert Kinzer sounds like a very well-rested man. However many teenagers’ lives he gets paid to ruin, he doesn’t seem to be losing sleep over it.

She did her job as a teacher well, for six years, but is now forbidden to teach ever again—because people know about those old sexy images of her, and therefore she’s considered unfit to work with children forever. Or something like that. 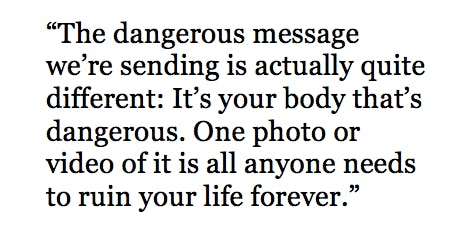 In both instances, and many more, “think of the children” is a flag-waving argument adopted by the people I sometimes refer to as professional sex-haters, who seem sadly unaware that without sex, there would be no children in the first place. But I digress. Halas lost her job because it’s believed that the aforementioned children could never respect her in a world where there’s video evidence of her as a sexual being.

I wonder if Halas’ former school district has The Scarlet Letter on its curriculum? What fun to listen in on that classroom lecture: “In Nathaniel Hawthorne’s classic novel, Hester Prynne was a sexually immoral woman, shunned by her community and kept away from its children—just like our own Ms. Halas. For homework, write a five-paragraph essay explaining why both women deserved what they got, because sexual immorality many years ago defines a woman for the rest of her life.”

Would Halas still have lost her job if, instead of professional pornography, she only made amateur images, like the ones Robert Kinzer uses to transform sexting minors into registered sex offenders? Probably, if anyone could access those pictures online.

The dangerous message we’re sending “the children” is actually quite different, and Halas and Kinzer both serve as cautionary examples of it: It’s your body that’s dangerous. One photo or video of it is all anyone needs to ruin your life forever. In fact, it’s against the law to photograph your own self before you turn 18; afterwards, even when it’s completely legal, for Zod’s sake don’t let nude or semi-nude pics of yourself get on the Internet—you risk becoming a sex offender.

The idea that nude or sexually explicit photos can ruin your life is the ultimate in self-perpetuating prophecies: those who predict that it is so, do their damnedest to make it happen. These anti-sexuality bigots—prosecutors like Robert Kinzer or school administrators like those who deemed Stacie Halas unfit for teaching—remind me of the racist bigots who oppose mixed-race marriages. They do so not out of bigotry, they insist, but of course from concern for “the children.” As recently as 2009, a mixed-race couple in Louisiana was denied a marriage license by a justice of the peace on these grounds—he insisted that any children of theirs would be destined for unhappiness, shunned by black and white people alike.

Yes, there really are bigoted jerks out there who still give grief to mixed-race kids and mixed-race couples in this day and age, the same bigoted jerks who oppose mixed-race marriage “for the children.”. And  yes, nude photos of yourself really can ruin your life, especially thanks to government employees whose job descriptions seem to include leeringly scavenging the Internet for old nude images they can then use to ruin your life. Fire that sexy teacher! Imprison that sexting teenager! Give the adulteress a scarlet letter, and outlaw mixed-race marriages. Because history always looks kindly on the people who do such things, right?