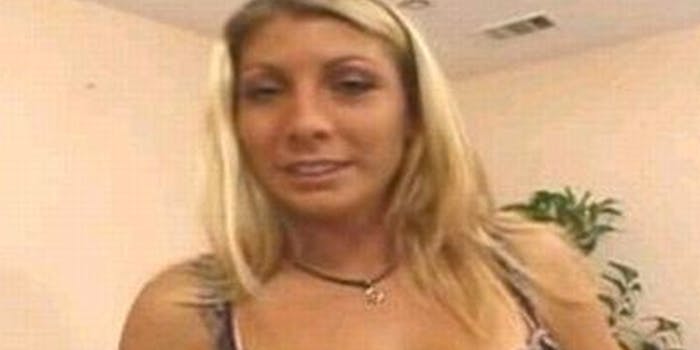 Stacie Halas, 32, lost an appeal to get her job as a middle school teacher back, because videos from her porn-star past are still easily found online.

Somewhere in California there’s a kid who’s sitting at home alone on his computer.

The kid comes from Oxnard, a SoCal suburb about an hour north of Santa Monica, and he’s just entering into the 7th grade. He’s 13-years-old—a boy—but he’s learning about himself, beginning to figure out what’s what and how what feels. He’s exploring online. He’s daring. He’s going to places he’s never been before.

And that’s when he sees a video clip of his science teacher having sex.

Stacie Halas, 32, was a science teacher at Richard B. Haydock Intermediate School in Oxnard, Calif. She was blonde and tan and blue-eyed and attractive. She’d taught at Haydock since she first got into the business in 2009.

“We ask that you be particularly vigilant over the next few days with respect to the Internet being accessed by your child on his or her telephone or other Internet-ready device,” the school warned. Halas could show up at any time.

The school board fired Halas one month later in a unanimous vote. Nobody offered any type of official comment or statement, but reports noted that officials were concerned about the disruption it would cause if she ended up returning to the classroom.

That’s how things stood for eight months, until just the other week when Halas took to a state panel to appeal to get her job back.

The three-judge panel heard her case and deliberated and on Jan. 11 came forth with a rather lengthy decision unanimously ruling that Halas was unfit to resume her post at Haydock Intermediate. The reason: her pornographic past can continue to haunt.

How’s that possible? Well, just run a search for Stacie Halas on Google. Then prepare to shield your eyes.

“Although her pornography career has concluded, the ongoing availability of her pornographic materials on the Internet will continue to impede her from being an effective teacher and respected colleague,” Judge Julie Cabos-Owen wrote in the decision.

Speaking after the ruling, superintendent Chancer told reporters that he was happy with the commission’s final ruling, noting that Halas’ decision to “engage in pornography was incompatible with her responsibilities as a role model for students and would present an insurmountable, recurring disruption to our schools should she be allowed to remain as a teacher.”

Halas may forever be barred from teaching in Oxnard, but anyone who’s ever been to middle school knows that her name will echo through the halls for as long as the Internet shall live.