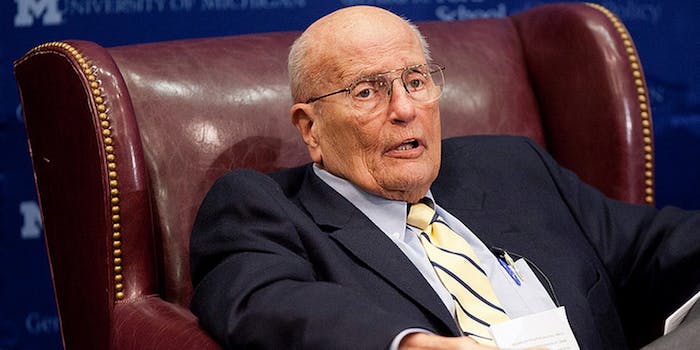 Cory Booker, eat your heart out.

Rep. John Dingell (D-Mich.) has been on Twitter for four years—a blink of the eye compared to his 58 years of service in the House—and is probably better at it than you. Just goes to show that octogenarians can get the hang of social media, given the right congressional aides.

Most notably this week, Dingell raised an eyebrow at the Environmental Protection Agency’s Office of Water, which auto-tweeted a link to the frighteningly popular and predictably vapid iPhone video game Kim Kardashian: Hollywood. Not exactly in the department’s purview.

I’m the last original author of the Clean Water Act, but I have no idea who/what a Kardashian is and I rarely play games. You OK, @EPAwater?

Staff has now informed me of what a Kardashian is. I’m only left with more questions.

Prior to this confusion, Dingell hit his Capitol Hill colleagues with a scathing subtweet.

Back in Washington as the House comes back into session tomorrow. I don’t have any silly graphics to accompany this, but you get the point.

He also got in on the fun everyone was having with LeBron James memes.

With the House adjourned for the week, I’m taking my talents back to Michigan to spend time with constituents. #MI12 pic.twitter.com/1saVo5ubpT

We didn’t need Instagram to get photos like this 50yrs ago, but I’ll still tag it #nofilter. #tbt pic.twitter.com/BM7DgE1gkU

Best of all, he reminded us that Obamacare is here to stay. And why wouldn’t you trust a guy with more than half a century of political experience? Seriously, I need to high-five this man.

The ACA will remain standing long after the thinly-veiled and tiresome partisan legal challenges have come and gone: http://t.co/O4NDyEWSrT

This reaction to all Dingell’s power-tweeting just about sums up our own feelings:

Sadly, Dingell announced in February that he is not seeking reelection, which means our finely lettered “58 More Years!” signs were all for naught.  Suppose he has earned a break, though.