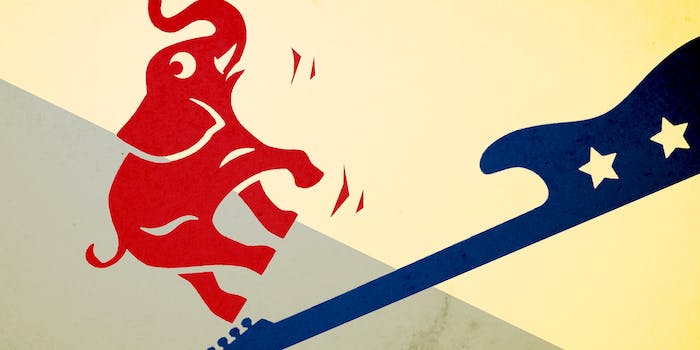 The 8 best times the RNC got trolled this week

The GOP can't catch a break.

Saying that the RNC has been crazy is an understatement. The convention, which brought Republicans together to unite around a platform and a party nominee, has been filled with chaos, protests, line dancing, and even a rather zealous WWE-like entrance.

Any event with this much hype will be scrutinized by the masses, whether it’s politicians, celebrities, or media outlets. But it seems that some chose to take that scrutiny further, much to our entertainment. Some chose to become an active participant in the RNC narrative, invited or not.

Here are some of the best trolls to be unleashed on the convention.

Colbert, in typical fashion, crashed the RNC and gave viewers a tour of the area. He then proceeded to, unexpectedly, take the stage to deliver a dramatic “Hunger Games-like” speech to a less than excited audience before being escorted off by security (but not without one last joke).

2) Comedian Eric Andre gets all up in Alex Jones’ face

Comedian, TV anarchist, and actor Eric Andre (not from The Daily Show), found himself on stage face-to-face with right-wing conspiracy peddler Alex Jones. Most of the highly professional conversation surrounded whether Andrew would have sex with Andre’s wife. But you can see for yourself.

You had to assume that the Clinton campaign wasn’t going to go down without a fight. As usual, making use of social media, the campaign chose to invest in Snapchat filters that, well, clearly show their feelings toward the GOP nominee.

“I wish you would step back from that podium, my friend.” In what may have been the most unexpected troll of the week, the rock band played a show big on a left-wing agenda (and short on hits) for the Republican crowd.

The ad speaks for itself. I just assumed Trump’s kissing technique included leaning to the right.

Trump, Cruz kiss and make up, on a Cleveland billboard, courtesy of https://t.co/sKFeb8aAJ4. pic.twitter.com/pYQsQ30KKg

We’ve all been there.

8) And, of course, that time the RNC trolled itself

Convention planners playing “Over the Top” for their nominee? That basically sums it all up.

Summertime and the trollin’ is easy. Too easy? You be the judge. For now, we’ll just enthusiastically await the certain rebuttal come the DNC in Philly. Stay tuned.