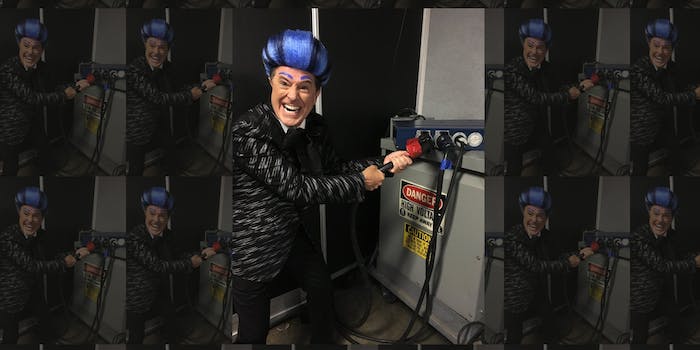 He's there to announce the start of the Hunger Ga—the Republican National Convention.

Stephen Colbert is bringing The Late Show to the Republican National Convention this week, but the hijinks are already on full display as he briefly took control of the RNC stage late Sunday.

Donning the outlandish hair and outfit of his Caesar Flickerman-like character from his recurring Hungry for Power Games segment, Colbert roamed the RNC floor—likely as part of his show. At one point, he discovered the generators powering up the Quicken Loans Arena for the RNC.

At the center of power at the RNC pic.twitter.com/R8kBtEI7Hq

However, he might’ve let some of that power go to his head. Colbert took the stage to take a few jabs at presumptive nominee Donald Trump to launch the 2016 Republican National Hungry for Power Games—or the RNC. It’s official—he even marked it with his gavel.

It took more than 15 seconds, according to one recording, for someone to get onstage to escort Colbert off—and even longer for the actual escorting to occur. But Colbert had to get one last Trump burn out before he left.

“I know I’m not supposed to be up here, but to be honest, neither is Donald Trump,” Colbert said, and there were a few people witnessing it all who couldn’t help but laugh.